Holden is a crewman on the Canterbury, an ice-hauler traipsing back and forth between the inner planets of the Solar system and the outer colonies. When his ship is attacked by unknown forces whilst investigating a derelict, a series of events is set in motion which will lead the three great powers - Earth, Mars and the Belt - to the brink of war. Meanwhile, Miller, a cop on Ceres, is tasked with investigating the disappearance of a young woman. His search leads him closer to a far-ranging conspiracy, and into contact with Holden and his crew. The stakes are high as they uncover a threat to the entire human race, a threat which some see as an opportunity... 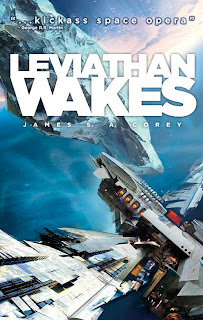 Leviathan Wakes, the first book in The Expanse series, is an unapologetic, old-school space opera. There's been a few of these recently, but few with the elan and furiously page-turning readability of this book. Part of this can be attributed to its writers: James S.A. Corey is a pen-name for Daniel Abraham, the author of the brilliant Long Price Quartet fantasy series, and Ty Franck, George R.R. Martin's assistant who created the setting for an SF roleplaying campaign. Abraham's experience and steadying hand and Franck's ferocious enthusiasm have combined here to create something quite compelling. In the acknowledgements section they reveal that a number of other major SFF authors had a hand in critiquing the book and offering advice, such as Walter Jon Williams (himself a space opera veteran) and astrophysicist Ian Tregillis, who helped out with the hard science part of the book.

Part of the appeal of the book is its structure. Like Donaldson's Gap Series and Martin's Song of Ice and Fire, it uses a rotating POV technique. Unlike those big, sprawling series, Leviathan Wakes only has two major POV characters, Holden and Miller, and bounces back and forth between them in turn. This has the effect of keeping the book very tightly focused, helping keep the pace fast but not so much that subtler nuances of plot and characterisation are lost. The authors aren't reinventing the wheel here and the two characters are pretty standard types: Miller is the embittered, cynical, divorced, hard-drinking cop with trust issues, Holden the idealistic, righteous and optimistic officer. Naturally they're chalk and cheese and don't get on very well at first but eventually strike up a good working relationship and earn some mutual respect.

Luckily, the authors are too good to let this transform into a 1980s buddy cop movie. The characters are well-motivated with convincing motivations and rationales for their actions, and they are steered away from cliche as their relationship takes some unexpected turns as the book progresses. There is also a nice contrast in that Holden has a small crew of well-drawn characters supporting him, whilst Miller is working alone. The supporting cast, such as Holden's crew, is also well-depicted, but the important character of Fred seems a bit too convenient and good to be true, and hopefully we get more into his head in later books in the series as he is a bit flat as a character at the moment. The other major character, Julie, is presented in an intriguing manner: missing when the book opens, Miller constructs a mental version of Julie to help him get through the case and then has to keep readjusting that image as he encounters the life story of the 'real' Julie.

The book appears to have many influences. John Carpenter's The Thing appears to have been one, whilst the small ship and the loyal crew elements recall Firefly and Blake's 7. Using a (relatively) small cast as a window onto larger events, mostly reported through news reports and tension-filled long-range transmissions, is reminiscent of Babylon 5, as is the general tech level and the use of real Newtonian physics in the space battles. I'd also be surprised if Donaldson's Gap Series hadn't been read by both authors, whilst the cop-in-space-noir-thriller angle is reminiscent of some of Alastair Reynolds' work. The tensions between the 'stations' (as the asteroid settlements are derogatorily called by the people of Earth and Mars) and the planets also recalls CJ Cherryh's Downbelow Station. But these influences are never worn too overtly on the sleeve: Leviathan Wakes also forges its own path.

Leviathan Wakes (****½) is a ridiculously entertaining space opera, let down perhaps by only a couple of coincidences and moments of dramatic convenience. Otherwise it's a relentless, page-turning novel with some great character-building. The book will be published in the UK on 2 June 2011 and in the USA on 15 June 2011. The second volume, Caliban's War, is apparently already nearly complete and should follow in a year or so.
Posted by Adam Whitehead at 10:13

Man, you had to name-check Firefly AND Babylon 5 didn't you? I'm pretty excited for this book. May is too far away.

Pretty happy I've already pre-ordered this from Book Dep - I'm planning on reading anything by Abraham after loving the Long Price Quartet (though I'm not so sure about the SM Stirling stuff).

Sounds like real good stuff. Look forward to read it.

Just finished it and absolutely loved it, best book I've read this year.