The Holy Machine by Chris Beckett

The world has suffered the Reaction, a rise of religious fundamentalism that has outlawed science and thrown much of humanity into poverty. Only in Illyria, a great city-state in the eastern Mediterranean, does science still prevail. Growing up in Illyria, shy and timid George Simling accepts the doctrine of Reason until it begins to defeat itself: to prevent the development of true AI amongst its robot servitors, the rulers of the city decree that all robots are to have their memories wiped every six months, including that of George's love, the sex-robot Lucy. Fearing that her growing sentience will be obliterated and realising that Illyria's enforced atheism is as stifling as the religious insanity permeating the world outside, George takes Lucy and flees the city, hoping against hope to find somewhere they can live in peace. 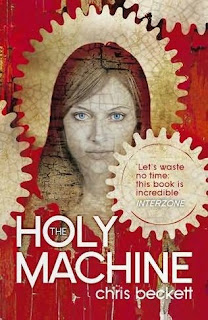 The Holy Machine was originally released in 2004 in the United States, but came to broader attention when it was published in the UK by Corvus last year. Early reviews have claimed that the book is an important step forward in the development of science fiction as a literary form, proclaiming comparisons with Orwell. These have been somewhat overwrought, but certainly The Holy Machine is a book with artistic aims far beyond its simple, I, Love Robot, premise.

The novel addresses questions of blind faith (in science or religion), indoctrination, the stifling of questioning, free speech and what rights, if any, that sentient computer intelligences should be allowed to possess. These issues are discussed through the straightforward story, as George strives to find moderation and peace in a world uninterested in compromise and his mother is drawn deeper and deeper into the artificial reality of SensSpace. Beckett does not suggest his future is plausible or realistic (though elements of it are), instead using it as a backdrop to tell his modern, adult fable about identity and truth. 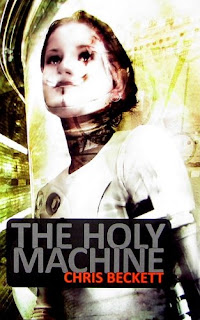 He is mostly successful. Like a Christopher Priest novel, the prose is deceptively simple, with themes and ideas revealing themselves as you read further into the book until you realise the picture Beckett has been painting is far more complex than it first appeared. Unfortunately, his characters suffer a little: George, his mother Ruth and Lucy are developed enough to be interesting, but don't really come to life in themselves enough to be really compelling, due to the low page count and tight focus. The same factors keep the story evolving quickly, preventing it getting bogged down too much in its issues, but this also means some interesting characters and subplots are skipped over too rapidly near the end, particularly George's encounters with religious moderates near the end of the book showing there is hope that the world can return to an acceptable balance after all.

The Holy Machine (****½) is a book that is deceptively straightforward but reveals more layers of theme and meaning as you progress further into it. This is intelligent and thought-provoking SF. The novel is available now in the UK and USA.
Posted by Adam Whitehead at 16:14

Well darn! My library doesn't have it so I've gone ahead and ordered one via The Book Depository.

Sounded interesting enough to make me free up some change in my pocket. *laugh*

I enjoy your blog. Thanks to you I found the follow up to Life on Mar, Ashes to Ashes.