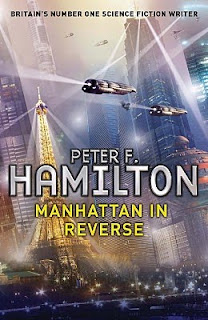 The repackaging of Peter F. Hamilton's novels continues in 2011, following on from the rejacketing of Pandora's Star and Judas Unchained last year. First up is the cover for Hamilton's new short story collection, Manhattan in Reverse, due later this year. 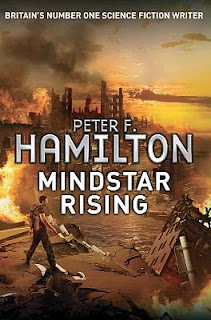 Then Hamilton's Greg Mandel Trilogy is being reissued. These novels - Mindstar Rising, A Quantum Murder and The Nano Flower - were originally published in the early 1990s and established Hamilton's credentials before he embarked on the epic Night's Dawn Trilogy (which I suspect will be repackaged next). An American omnibus edition of the three books is due in May, but the British editions will remain in single volumes. 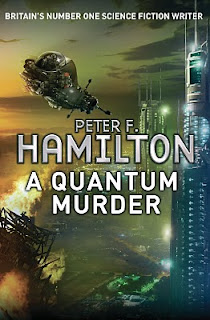 Nicely-done, although somewhat misleading. Mindstar Rising seems to depict London after the proton bomb which devastates the city. Which is fine, except this is a very small part of the backstory of the series, already decades in the past when the trilogy opens. I'm assuming one of the cities in the other covers is mid-21st-Century Peterborough, which in Hamilton's vision has become the UK's new capital city after London's near-destruction (this is, by the way, the single-most-fantastical-and-unlikely thing that happens in any of Hamilton's books, way beyond the possibility of the Sleeping God existing, FTL or rejuvenation). 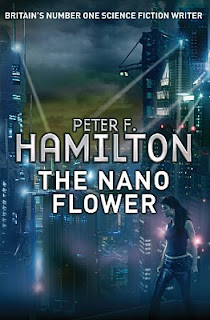 Much larger images can be seen at the Walker of Worlds blog.
Posted by Adam Whitehead at 17:27

I'm liking these new covers, almost as much as the originals. Can't wait to see the nights dawn ones, they'll have to be good to compare with the originals.

Hopefully they bring his works to a larger audience.