In a twist no-one was expecting, it appears that Ridley Scott's new SF movie is actually an Aliens piece after all. 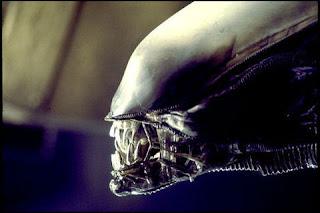 "Am I in this thing or not, Ridley? My agent's got a lot of other work lined up and I can't keep turning down RSC roles forever."
Scott originally developed a two-movie 3D prequel concept. The project seemed to collapse down into one film when former Lost showrunner Damon Lindelof came on board to do a rewrite, and this then inspired Scott to transform the movie into an 'original' SF feature called Prometheus. The assumption was that it was now a whole-new, original setting and film.

However, recent comments by actor Michael Fassbender and inside sources at Pinewood (where set construction is already underway, apparently including the crashed spaceship from LV-426) suggest that Scott was misunderstood. Prometheus is apparently still set in the Aliens universe and the original notion of it being a prequel to Alien seems to be intact, with the 'space jockeys' and the Giger-designed xenomorphs both still slated to appear.

Exactly what Scott meant by his comments is unclear. Possibly he wanted people to focus on the film as its own beast rather than 'yet another Aliens flick'. Interesting to see if this is clarified in the near future.
Posted by Adam Whitehead at 19:23

Oh, FUCK no! For a second I was really excited about Prometheus. Gaah.

Hmm... sounds suspiciously like to film company put their foot down and said that since it was their money they wanted a Alien film.