In 2007, a photographer in New York City, Nev Schulman, was surprised to receive a parcel in the post containing a painting. It was a painting of a picture of his that had been published in The New York Sun some weeks earlier, and the artist was apparently only eight years old. Intrigued, Schulman began corresponding with Abby, the artist, online under her mother Angela's supervision. His brother Ariel and friend Henry, amateur film-makers, smell a potential good story here and begin filming Nev's interactions with Abby's family by phone and computer. Nev also comes into contact with Abby's family members via Facebook, particularly her 19-year-old sister Megan, whom he starts 'Internet dating'. Since the family live many hundreds of miles away in Michigan, the chances of meeting them soon do not appear to be likely. 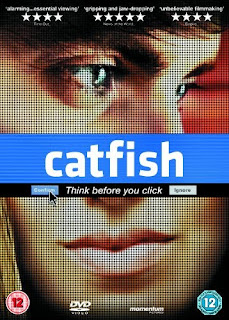 Whilst working on a project in Colorado, the trio start to find holes in the story presented to them. Megan, who sings and plays guitar and piano, sends Nev some songs she's recorded, but he finds that they are recordings of songs from YouTube. Googling reveals no mention of Abby's artistic skills in local media. Nev becomes concerned over being scammed, and they decide to detour to Michigan on the way home to learn the truth.

Catfish is an interesting film that was released last year after proving a storm at the 2010 Sundance Film Festival. It then triggered a significant wave of controversy, though we'll come to that in a moment. It's easy to see why the film has been praised: it's a zeitgeist-capturing movie about people who forge relationships online where the details presented by the parties involved may be exaggerated or indeed fabricated altogether. The final act, exposing what's really going on, subverts audience expectations about the motivations of those involved. As a piece of film-making, Catfish is entertaining, intriguing and builds tension towards the moment of revelation (though it has to be said that this is a quiet, non-flashy film; the trailer suggesting it's a 'thriller' is totally inaccurate).

The film also asks an important question of the audience, one that may or may not have been intended by the film-makers. The film is about people passing themselves and a situation off as something that is rather different to what is presented. So, it is perfectly logical for the viewer to ask, "Okay, but what about you guys? Is this really what happened? Are you manipulating us?" If the film-makers had done this deliberately and perhaps avoided answering the question in promotion, it would be a fascinating and metatextual statement on presentation, perception and motivation in a world where it's all too easy to manipulate these things online for an intended purpose or effect. Unfortunately, the film-makers have spent a fair amount of time saying that everything in the film is 100% the truth and nothing has been changed or manipulated.

This claim is immediately challenged by a scene in which Nev and his compatriots arrive at the address supplied by Megan, intending to surprise her, only to find the house abandoned and uninhabited. Nev opens the postbox (rather dubiously; interfering with the mail in the USA is a federal offence) and finds it stuffed full of the letters and packages he's sent to Megan during the course of their 'relationship'. However, this is clearly a fabricated scene: the post has 'return to sender' already stamped on it, indicating that the post was delivered, not picked up and sent back to Nev in New York. He then appears to have taken the post back to the address and set the scene up to demonstrate to the viewer the deception of Megan providing a false address.

This in turn leads to the viewer questioning the truthfulness of the entire enterprise. Many tens of thousands of words have been dedicated to questioning every aspect of the film by multiple articles, blogs and even news items on US television, so I'll avoid into delving too far into that, except to note that there seems to have been some very clever manipulation of scenes and chronology going on to present the narrative as it unfolds to us.

The film, taken at face-value, is intriguing and raises interesting questions about Internet-based relationships. However, the fact that aspects of it are clearly manipulated and possibly exploitative (one of the participants has since passed away, something that has indeed been verified, but which makes the situation even murkier) leaves a bad taste in the mouth. But at the same time, the fact that after watching the film the viewer can then go online and read up on all the controversy and draw their own conclusions itself adds another level to the experience: layers of deceit, spin, presentation and impersonation. Talking about the film and seeing how different people interpret it is arguably more interesting than the movie itself.

Catfish (score not really applicable) is a bizarre and thought-provoking film about modern media, manipulation and social networking. Whether you believe all of it, none of it or something between, it definitely raises some very interesting questions. The film is available now on DVD (UK, USA) and Blu-Ray (UK, USA).
Posted by Adam Whitehead at 16:47

Email ThisBlogThis!Share to TwitterShare to FacebookShare to Pinterest
Labels: catfish

If I may: you're still imposing a division between what is presented to us and what is in fact known. I haven't seen the film, but from what I've heard it tries to show that there is no such division: that what we "know" (through, for instance, talking to people online) is only ever presentation. You pick up on the fact that we don't know whether the myth of the film is itself a false presentation, and you think this adds depth to it.

However: you object that OUTSIDE the film, the filmmakers may have lied to you. It's like you watch the film thinking "this is a film, it's only what is presented to me and thus it may not be true", and then you go and try to find out whether it's true or not be seeing what the filmmakers said. But what they say to you about the film is just as much a presentation when its outside the film as when its inside the film.

I think the point is that in a world where all our information comes from films people have made, the attempt to treat some films as presented "art" and other films (eg the news, interviews) as transparent windows into what is known is unsustainable. It's all a presentation. It's true that there's a taboo on making art that looks like news (hence people getting upset), but without any technological barrier to doing so, it's hard to see how that taboo can be maintained - we're no longer in the age where four or five television executives get to decide for us with rigourous fact-checking which films should be stamped "NEWS" and which shouldn't be.

A good comparison, I think, might be Phoenix's announcement to the news media that he was retiring from film to become a rap star - it was later revealed that although dressed as "TRUTH" (it was delivered through interviews with mainstream media), it was in fact only a presentation - it was all part of a film, and he was just appearing in character. Adding to the ambiguity, the film itself also purports to be TRUTH (it claims to be a documentary about his change in career), but it was later said in other statements (ie presentations) by the filmmakers that the documentary was actually a mockumentary, and that Phoenix had never actually changed career. But maybe the film is the truth, and the presentation that it's only art is itself either a lie to rescue his reputation or itself a work or art?

There's nothing new about it, either. I think we can trace it back to Orson Welles, and the moment when "War of the Worlds", an artwork, masqueraded as a true news broadcast. Back then, there were still authoritative reporters to tell us what was true and what wasn't - but that's less and less the case.

Indeed, we're really just returning to an earlier age. Before central state bureaucracy and central one-to-many communication, the "hoax", literary as well as personal, was simply a fact of life. All sorts of people wrote all sorts of things pretending to be entirely different people, and when people asked what was going on they got another document, a presentation, which was just as doubtable in its source and intent as the things it was meant to be speaking about.

And that's the point. We treat ambiguities as games, and expect to be able to step outside the game and ask "who are you really?" "what's really going on?" - but at some level, we're relying on central authorities (the media monopoly, the possibility of legal action, the accessibility of public records) to vouchsafe for us that the right answers are being given. In much of the modern world, it's harder and harder to step outside the game and ask for 'independent', 'authoritative' verification.

-- Wastrel (for some reason blogger won't let me use my OpenID anymore, it just gives error messages).

I meant to leave it at that, but I want to add one last thing:

people got pissed at "I'm Still Here", too, because again people disliked not knowing what was true. But the SOURCE of that anger is not the filmmakers (in either case), but the destabilised viewer, who is forced to confront their own embarrasing inability to tell truth from fiction.

And because that seems to be the whole point of Catfish, I don't see it as a problem. It's as though it says "you don't know whether what you are told is true!" and the viewers nod sagely and then think "wait, is THAT true?" and the filmmakers say "yes of course you know THIS is true. but remember that anything we say could be false" and the viewers nod sagely and are happy... and then worry, "wait, when you said that it was true... was THAT true???"

I think the ambiguity of the film is fascinating, and it would be interesting if the film-makers themselves were continuing to play a role in public by saying it's 100% true in interviews and so on as part of the continued commentary about media manipulation. In an age where we see these kind of meta media campaigns it's not impossible that whole thing is geared towards that.

Of course we don't know if that is the answer or if the more obvious solution - the film-makers 'massaged' and even re-staged events for the benefit of the camera - is correct, or something inbetween (and as I said some things, like the person who died, appear to be true and verifiable). I think a lot of people don't like being hoodwinked, but others don't mind being hoodwinked if that's part of the intended artistic effect, and that explains the extreme differing reactions to the film.

What will be interesting is if the truth ever emerges, and if it's possible for anyone to be sure that it is the truth :-)

I really enjoyed the film and took it at face value even if some of the vision was quite obviously manipulated for artistic effect. As far as I'm concerned it's a triumph of modern, almost guerrila film making and the controversy surrounding it just adds to that.

If you want to see just how badly online relationships can actually turn out, go check out "tallhotblond", that was some freaky shit. Oh and "Downloading Nancy" a dramatisation of a real event.

It's interesting to note that these guys have now been linked to Paranormal Activity 3.

As for "I'm Still Here" - I loved that film and anyone who thought it was "real" needs their head checked.