Next SHADOWS OF THE APT book delayed

On his blog Adrian Tchaikovsky has confirmed that the seventh volume of his Shadows of the Apt series will not make its August publication date. Though the novel was handed in a few months ago, the turn-around proved a little tight. The novel will instead be published on 7 October 2011. Since that means that Tchaikovsky still gets two large fantasy novels out in the same year (Book 6, The Sea Watch, only came out a couple of months ago), that's hardly a disaster. 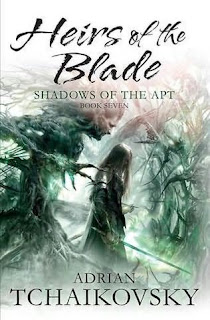 Tchaikovsky is now hard at work on the eighth volume, provisionally titled The Air War, for publication in 2012.
Posted by Adam Whitehead at 10:41

Email ThisBlogThis!Share to TwitterShare to FacebookShare to Pinterest
Labels: adrian tchaikovsky, news, shadows of the apt