The Cold Commands by Richard Morgan

A year ago, the famous swordsman Ringil Eskiath, hero of Gallow's Gap, prevented the return of the Dwenda, the ancient rulers of mankind, to the Earth. Ringil and his wartime allies, Egar the barbarian warrior and the half-Kiriath agent Archeth, stand vigilant against any future incursions by this foe. 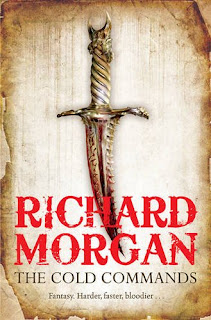 Now Egar, Archeth and Ringil face separate mysteries. A bar-room brawl and reports of slaves being held in unusual circumstances leads Egar into an ill-advised confrontation with the Empire's dominant religion. A warning from the Helmsmen sends Archeth on a mission into the wastelands to recover a valuable item, an item which comes with a dire warning. And a chance encounter between a runaway slave and Ringil results in blood, mayhem and revelations of a dark kind.

The Cold Commands is the long-awaited sequel to Richard Morgan's The Steel Remains, the author's first foray away from SF and into the arena of secondary world fantasy. The Steel Remains was a blood-soaked, swords and sorcery adventure, black of humour and fairly brimming over with violence and sex (most of it graphic and gay, to the disquiet of some readers). It was solid enough stuff, though perhaps not as good as the billing suggested. Morgan's SF is so good because he writes with anger, flair and passion, and is at its best when he is clearly ticked off about something (in Black Man, particularly the self-destruction of a society which cannot talk to itself, only throw up barriers and tear itself apart). The Steel Remains, though a reasonably solid novel, lacked the vitality of his earlier SF.

The Cold Commands has that energy back, and in spades. Here Morgan confronts the issues of religious fundamentalism and blind dogma as the Citadel attempts to garner more control over the Empire than the young (and notoriously uncompromising) Emperor. Archeth recalls the religious disagreements that almost tore apart her parents' marriage: her Kiriath father's mounting horror as his calm, rational scientific explanations for everything are rejected by his human wife in favour of rote-learned rhetoric. These issues give the book a bit of a philosophical and thematic kick to it that sees Morgan's writing return to the top of its game.

Whilst this issue is present and explored intriguingly, it does not overwhelm the plot. This time around there is a three-pronged storyline with each of the major protagonists having their own story arc to follow. Ringil probably has slightly more action than Archeth and Egar, but the division of responsibility between the three is more equal this time around. This approach contributes to the book's greater length (more than half again the size of The Steel Remains) and also allows Morgan to bring in the noir-like investigative tone of his earlier SF work. We also get a lot more backstory and revelations about the mysteries of the world, which further the hints in The Steel Remains that this is as much a far-future SF story as it is a fantasy epic.

Morgan's skills with characterisation are extremely strong, as usual. Ringil remains an unreliable and flawed protagonist, whose motivations are fascinating and complex, whilst Archeth is conflicted and guilt-driven, unsure of her place in the world now the rest of her people have departed. Even the relatively straightforward Egar has his frustrations and demons that drive him to make some spectacular mistakes which drive the plot onwards. The secondary cast, this time consisting of mostly new faces with only a few returning characters, is also extremely well-drawn, particularly the increasingly punchable young Emperor and the new character of Anasharal, who is amusing and annoying in equal measure.

This is a character-driven and intelligent fantasy novel, but Morgan doesn't forget to bring the mayhem. There's a midnight raid on a temple that Robert E. Howard would have approved of, more swordfights and murders than you can shake a stick at and a few rare but impressive displays of sorcery...though the dividing line between 'sorcery' and 'vastly superior technology' is intriguingly blurry.

In fact, the only thing lets The Cold Commands down is that a major storyline is kicked into gear in the latter part of the novel only to be put on hold for the impressive finale. With this story presumably left to be picked up in the third book, this means that The Cold Commands does not stand alone as nicely as the The Steel Remains, and is not as self-contained. This is a relatively minor issue, but one worth bearing in mind.

The Cold Commands (****½) sees Morgan back on top form and delivering a book as passionate, fast-paced, smart and furious as any of his SF. The novel will be published on 11 October in both the UK and USA.
Posted by Adam Whitehead at 20:06

Email ThisBlogThis!Share to TwitterShare to FacebookShare to Pinterest
Labels: a land fit for heroes, richard morgan, the cold commands, the steel remains

I pre-ordered this nearly exactly a year ago, June 2nd to be exact (just checked my Amazon account) and have been patiently waiting.

Caught the few sparse updates Morgan posted on his blog which didn't really light my fire and I did consider cancelling the order a few times as it was delayed again and again. But now I've seen this review I'm getting excited about this second book.

Thanks for the great review, Adam. Sounds really good, and I can hardly wait to read it!

Nice review Adam- thanks.
Much relieved he's back on form and good to know the books reactivated at last!