Game of Thrones continues to build slowly in the USA, but its UK performance has become downright unpredictable. 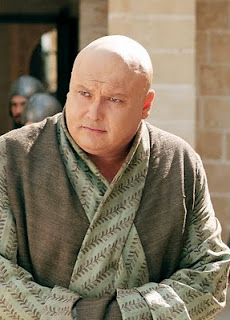 Varys approves of the ratings news, but will not tell the King until it suits his inscrutable purpose.
Last week saw Thrones' UK overnight ratings completely unexpectedly shoot up to 628,000, a 20% increase over the preceding week after a two-week steady drop. Whatever caused that spike clearly wasn't around this week as ratings moved back down to 522,000, comparable to Episode 2 and 3's 531,000 and 506,000. Very curious. In the meantime the 'full week' ratings for Sky Atlantic, taking in online viewings and multiple repeats, continue to trickle in on a two-week delay. After Episode 1's phenomenal 1.852 million, Episode 2 saw a drop to 1.641 million. Episode 3 showed signs of levelling off at 1.584 million. The full ratings for Episode 4 will be interesting to watch, to see if there is a similar spike to the overnights, or if the overnights came at the expense of the repeat viewings and the overall figures remain level.

Overall, Thrones remains the most-watched show on Sky Atlantic. The overnights for its first five episodes are also the five-highest-rated episodes in the channel's history and its performance is strong.

In the USA, Thrones is enjoying a slow and steady build. The overnights for Episodes 1 and 2 were 2.2 million but this has crept up to 2.6 million this week. Consolidated viewings are harder to track, since constant repeats and re-streamings on HBO Go means that the viewing figures for all previously-aired episodes are constantly increasing. However, it appears that total figures for Episode 1 are now exceeding 9 million, whilst Episode 5 this week got up to over 3 million with the same-night repeats. Whilst Thrones isn't setting record books on fire, it's a steady improvement which has made the show the third-most-successful series on HBO's current roster, behind True Blood and Boardwalk Empire. If the steady build continues, HBO will be very happy indeed, though I suspect they'll be a lot happier (and more likely to increase the episode order for Season 2, which a lot of fans and critics are calling for) if there is a sharper increase as we move into the late season period.
Posted by Adam Whitehead at 20:47

Excellent news. It's doing much better than True Blood did in its first season, and Boardwalk Empire has the advantage of established setting and material plus a major star.

Crap sums up the series. No story. Acting is dumb. And mindless sex scenes go so far beyond you wonder what was hbo thinking. Having a 12 year old suck the tits of a female actor is sooooo gross. Don't watch

I dunno if Steve Buscemi is a bigger star than Sean Bean, but yes. Very cool.

Expanding the season to 12 episodes--is that actually a feasible thing, or is it a pipe dream?

GoT's sex scenes are certainly nowhere near as 'outrageous' as say TRUE BLOOD's or many other shows on TV. And the actor is 8 and a prosthetic was involved. It's a disturbing scene that's meant to shock the audience (and the other characters) into realising that Lysa Arryn is more than slightly insane.

Wert, I wouldn't bother responding to that troll - who goes around the internet searching out articles on the ratings of any show in order to just post some mindless drivel telling others not to watch? What a tool. And anyone who claims there is no story should return to watching reruns of Barney and other nonsense.