Sadly, it was confirmed that today actor Jeff Conaway has passed away at the age of 60. Whilst the general audience would know him best for his roles as Kenickie in the movie version of Grease and as Bobby Wheeler on the American sitcom Taxi, SF fans would recognise him the most for his role as security officer Zack Allen on Babylon 5. 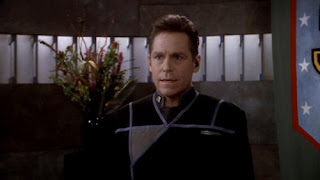 Conaway played the role of Allen for four seasons, making his first appearance in the sixth episode of Season 2, Spider in the Web, apparently as a featured extra. Conaway had watched and enjoyed the first season at home and had asked his agent to try and get him a role on the show. Whilst glad of the work, Conaway was surprised at the low profile nature of the role. However, as the second season continued the role of Zack Allen expanded radically and in the third season he became a major character, featured in the title sequence of the show. He went on to appear in several of the subsequent TV movies.

Post-Babylon 5, Conaway became better-known in the USA for his candid admission of substance abuse problems and repeated efforts to enter rehab, several times on reality TV shows. Unfortunately, despite several clean periods, he had several relapses and his death has been reported as being drug-related.

Conaway is sadly the fourth actor from Babylon 5 to pass away in recent years. Tim Choate (Zathras) was killed in a motorcycle accident in 2004, Richard Biggs (Dr. Stephen Franklin) passed away from heart disease the same year and Andreas Katsulas (G'Kar) passed away in 2006 from lung cancer.
Posted by Adam Whitehead at 16:31

Sad if not unexpected news. I saw a recent interview with him not long ago and he was clearly extremely ill.

This is just too bad. Hope he's at peace now. I really enjoyed him in B-5.