In the UK, Waterstones are offering a cool deal. Pre-order A Dance with Dragons by George R.R. Martin and get Mark Lawrence's well-received debut novel, Prince of Thorns, for free. The deal is running from now to presumably when ADWD hits the shelves (on July 12th). 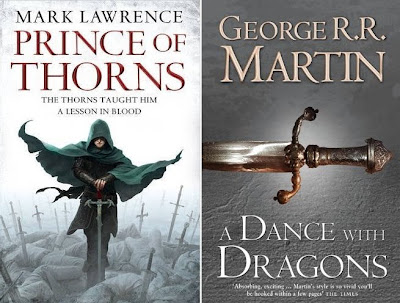 An interesting promotion. Prince of Thorns is next up on the review pile after the second Hunger Games novel, so I'll let you all know what I make of it.
Posted by Adam Whitehead at 16:07

what a great deal! i was all ready to place my order until i saw it was exclusive to the UK.

Good to hear you're reviewing Prince of Thorns soon. Looking forward to your take on it.

That's a cool offer ..... for people living in UK. But I'm not envious. I ordered A Dance with Dragons in advance a long, long, long time ago.

I preordered from them about a month ago. Wonder if they'll let me pick up the free book? In town tomorrow so I guess I'll go and ask them.

Thanks for the heads-up Wert

As I understand it you have to pre-order in store - the offer isn't retrospective - and you're getting an ARC essentially, a paperback uncorrected proof. And it lasts until the 3,000 copies are used up (or GRRM's book comes out and there's no longer such a thing as pre-ordering it).

Not my dream-child or rules, but it does seem like a bargain.

Very tempting if the in-store price is the same one as the one on the website, but I doubt it.

Is this a shop only offer? I couldn't see it on the website (book is half price thouh). If ADWD is discounted and prince of thorns (which is on my to buy list) is free then it;s worth pre-ordering at shop.

They did indeed back-date the offer for me. Hooray for them! So far (4 chapters in) it's shaping up nicely as well

Thanks for the details Mark. Seems a pretty good bargain and a nice way to get hold of your book in advance.
I'll try my luck on the way home tonight, otherwise there seems to be some decent deals on your hardback edition later on.

Sad to say that with the difference between the dollar and the pound right now even a free book doesn't off-set the difference. Sigh.

My pre order of Dance with Dragons was made before my 4 year old son was born. Don't think I'm paying Amazon more than a tenner for the hardback :)

Your son could be a teenager before the next one materialises. - Ian

Managed to grab a copy :)
Absolute bargain, thanks for the heads up, wert and Mark as the bookseller wasn't even aware of the promotion.

My Waterstones didn't get them in yet, despite having one of those ads for the offer.

I ordered a copy of DWD by GRRM in my local Waterstones store today and you receive an ARC of Prince. I managed to bag the last copy.

In that case did you reserve your reserve gift, anon?

No, since the only reason I would buy it from them is the promotion, and I might miss it if they sold out before I went to pick it up.

I pre ordered with Waterstones, the HB is £12.50 and you get the free book. So better than amazon. Best to do it in store and they ask for a £3 deposit.