The districts are rebelling against the Capitol, united by the symbol of the Mockingjay. Katniss Everdeen, the symbol of the rebellion, is now living in the secretive District 13 where she finds that she is to be used as a figurehead to bring President Snow down. However, Katniss is unhappy with the demands being put on her, and also with the fate of Peeta, now a prisoner of the Capitol. As two sides prepare for a final confrontation, Katniss has to ask if her new allies are no better than the enemy they seek to destroy. 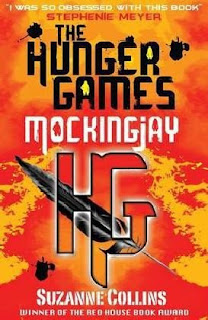 Mockingjay brings the Hunger Games Trilogy to a suitably bloody and epic conclusion. Though it has to be said it's also a somewhat rushed and predictable conclusion.

As mentioned in my review of Catching Fire, Collins wasn't planning for this to be a series, so had to scramble quickly in the second book to lay out a larger and more epic story. Whilst laudable, this effort was flawed because the story wasn't originally set up that way, and so many new characters and concepts had to be introduced in Book 2 that the actual plot of the book, Katniss fighting in a second Hunger Games, was fairly rushed. That problem extends into Book 3. Whilst the possibility of District 13 was first voiced in Book 2, we don't see it until Mockingjay. This means that in the space of a 430-page, large-typeface novel, Collins has to set up a whole new faction with its own cast of characters, ideology and goals, then bring in the existing cast and have them interact, then have them unite for the final assault on the Capitol, and then examine the issues raised by these storylines.

Collins does a credible job, but it's clearly not ideal. If the series had been planned as a trilogy from the start, District 13 and its dubious rulers could have been introduced and established earlier. Katniss's relationship with them and her lack of respect for authority, even an authority trying to achieve her long-term goal of destroying President Snow's regime, makes for a solid storyline, but it is under-explored here. In fact, the book is so packed that lots of elements are under-explored, and characterisation suffers. In particular, Finnick lacks the flair and fire he showed in the previous novel that made an interesting character, whilst Peeta comes across badly. Katniss continues to be a more complex heroine than expected, but most of the other characters suffer (and Coin, the head of District 13, is a bit of a two-dimensional figure at best). 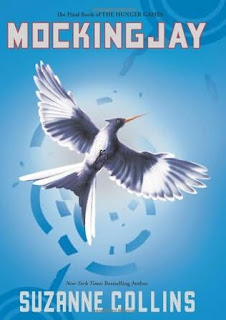 On the plus side, the rapid pace means that the book is certainly action-packed, and Collins has some ingenuity in coming up with more weapons for the Capitol to deploy against the rebels. There's also a nice contrast between the deadly serious final attack on the Capitol and the Hunger Games of the previous two novels. This is also a harsher novel: Collins is pretty ruthless with some characters and it's definitely a bloodier book where Katniss has to do some more morally questionable things that in prior novels, which raises the stakes and the tension in the ramp-up to the finale.

Mockingjay (***½) is a readable conclusion to the series, though the rushed pace hurts some aspects of it. However, the series is brought to a solid-enough conclusion, if a reasonably predictable one. The book is available now in the UK and USA.
Posted by Adam Whitehead at 17:37

Nice review. I tend to agree with you on nearly every point. I liked the first book, but didn't really think Collins had enough material for a satisfying trilogy overall, so ended up a bit disappointed with aspects of Catching Fire and Mockingjay.