Still with Thrones, preliminary ratings information for the third episode reveals that there has been both an unexpected rise in the USA and an unexpected hold in the UK. 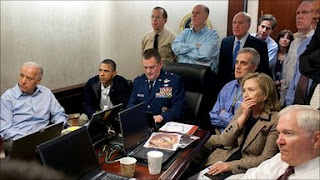 "Are you sure we can't record this and watch Game of Thrones instead?"
"No, Mr. President."
In the USA, the third episode delivered 2.4 million for the first showing, up 200,000 on the previous two weeks. Combined with the later repeat, that lifts the episode to 3.1 million, a small but notable improvement over the first two weeks. Given the expectation was that Thrones would start well, drop slightly and then recover, holding its ratings for one week and then a minor rise is unexpectedly good news for HBO. In addition, HBO has added in the free-to-air viewers and additional HBO online figures to bring the ratings for Episode 1 up to 8.7 million. It's possible that later repeats will not add as much to the figure as in previous weeks, since news of Osama Bin Laden's elimination broke just after the first airing of the episode, but we may see increased online viewing from HBO's digital outlets.

In the UK, Thrones was expected to continue dropping and then stabilise somewhere around the mid-100-300,000 mark, the norm for Sky Atlantic shows. Instead, the show delivered 506,000 compared to last week's 530,000, a comparatively minor drop.

Full 'unadjusted' figures for Episodes 2 and 3 in both the UK and USA are not available yet, but the adjusted figures for Episode 1 in the UK have now risen to 1.852 million, which is absolutely massive. The real key will be the figure for Episode 2, which will show how many viewers the show has lost and how many have transferred to watching the show on repeats or online.
Posted by Adam Whitehead at 19:02

I'm glad to hear this news. I was worried that the ratings for the show would start okay, then melt away as it went on. Instead, it seems to be holding its own.

Has there been any announcement of when the series will be available to buy on dvd/blu-ray? Thanks.