GRRM gives a final status report on A DANCE WITH DRAGONS

George R.R. Martin has provided a final update and status report on A Dance with Dragons. He confirms that the final editing for the book is completed and all is now set for publication on 12 July as previously planned. 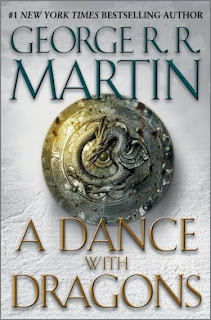 Martin provides some interesting information on the book. A Dance with Dragons consists of 75 chapters, including a prologue or epilogue (second only to ASoS's 82 chapters). The final manuscript count is 1,510 MS pages, compared to A Storm of Swords's 1,521 MS pages (neither counting maps, appendices or acknowledgements pages), thanks to a final editing pass.

Martin also comments on the book's POV character roster. Note that this is where things get spoilery if you haven't been following the POV count so far. Also note that the comments section may also get spoilery.

The POV roster is:

Martin confirms that whilst the POV roster is large - 16 characters, plus the prologue and epilogue - almost half of the chapters in the book are dedicated to Daenerys, Jon and Tyrion, with Theon coming in a little behind them. Some characters will only have a small number of chapters, like Cersei, Jaime, Melisandre and (last we heard) Bran.

GRRM also provides unusually detailed information about the evolution of the novel before signing off by saying that work on The Winds of Winter - the sixth and (hopefully) penultimate novel in the series - has now begun.
Posted by Adam Whitehead at 14:48


The most surprising news, in my opinion, was the revelation that Theon is the fourth-largest POV in number of POV chapters. Since he's our view on to the Boltons, the Boltons must have some important role to play in the story for this book.

I hope the epilogue character is Pod :)

Nice post. I missed where he noted that list. I'm going with Stoneheart as the one return POV that is, to paraphrase, a bit worser for wear. Functionally, will resolve the Brienne arc from AFfC, and will cover the BwB POV, that previously came from Arya, Jaime and Brienne.

I hope that isn't too spoiler-y, Adam.

The returning POV who is the worse for wear is Theon (as anyone whose read his sample chapter can agree with). I believe that GRRM has ruled out Stoneheart as a POV character for the rest of the series, though as always his plans are subject to change.

I also think ASoS made it clear that the next stage of the conflict in the North was going to be the struggle for control between the ironborn occupiers, the Bolton forces in the North already (under Rasmey) or returning from the war (under Roose), and Stannis on the Wall, so from this perspective it is unsurprising that the Boltons are playing a major role.

now, is it too late to speculate who could die in this one?

Sounds interesting, I assumed Theon would have 1 or 2 chapters just to give us some knowledge about Bolton’s doings, but it seams he is back as a full main character again. Very interesting.


Since the book apparently wasn’t truly finished before now, is the Audiobook still going to be published on the 12. July? It seams like a short time to record a reading of the entire book. I’m actually considering experiencing ADWD for the first time in audio form, Roy Dotrice really makes the story come alive.

Dotrice has been in the recording studio for 2-3 weeks already by this time. What GRRM's finished off just now are the appendices, the book itself has been done for nearly a month and before that the publishers had a finalised version of more than 95% of the manuscript for months, so they've had more than enough for Roy to be going on with.

The question remains if they can get the audiobook out on 12 July. I think it's the plan at the moment.

Adam, since you are generally more clued up then most. Have you any idea, whether maps will be included in the UK kindle edition?

Oh, okay. The way GRRM worded it made it sound like he had been tweaking on the entire manuscript to remove some fluff, but I believe you. I was starting to fear that Dotrice and the rest of the audio team might have started to record chapters that weren’t in their final form.

As far as I know, the Kindle edition will have all the content of the paper edition, including maps. I can double-check with Voyager during the week.

Brienne's fate could well be revealed in ADWD from another POV (especially if Pod is the new POV, or that guy they hung out with in AFFC whose name I forget now) or even just a report after the fact, maybe to Jaime. Brienne's fate being unrevealed at all would seem to introduce a major new timeline discrepency that Book 6 would need to unravel (since Brienne, if alive, would be starting Book 6 several months behind everyone else).

So, how many books? The series will be six is what I read everywhere.

The series is planned to be seven books. After A DANCE WITH DRAGONS will be THE WINDS OF WINTER and A DREAM OF SPRING.

For a while the series (originally meant to be a trilogy but these days are long gone!) was meant to be six books long.
But then book #4, 'A Feast for Crows' grew far too big to be published in one volume and Martin decided to split it the novel in two, by character and location. At that point Martin planned 'Feast' and book #5, 'A Dance with Dragons' to be parallel novels. Eventually, for various reasons structural changes were made and 'Dance' is now more than the 'Feast's other half, but in principle you can view 'Feast' / 'Dance' as volume 4, split in two.

(Wert elaborated far better than me on the genesis and consecutive alterations of 'Dance's structur somewhere before but I can't find the post - Wert, can you help out?)

Thus, the six novels you read about has turned into seven.