The Order of the Scales by Stephen Deas

The dragon realms have fallen into open warfare. As armies of dragon-riders do battle in the skies over the nine kingdoms, different factions maneuver and jockey for position during the chaos. The Taiytakei scheme to gain control of dragons themselves, whilst the alchemists fret over their dwindling supplies of the potions that control the dragons. If the supply runs out, a cull must take place. In the middle of it all, Jehal, the Speaker of the Realms, furthers his own ambitions and Snow, a dragon freed from the control of humans, continues her plans to liberate all dragons from the yoke of humanity, forever. 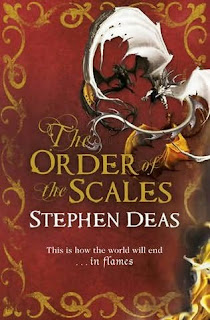 The Order of the Scales brings to a conclusion the Memory of Flames trilogy, following on from The Adamantine Palace and The King of the Crags. The first two novels left the world of the dragon-riders in a precarious state, and The Order of the Flames pushes it over the edge into full-blown warfare. Those who enjoy the idea of vast armies of hundreds of dragons engaging in battle will be well-catered for here. However, Deas maintains the focus on the characters, most notably Jehal and Kemir, and shows their plots and lives unravelling in the face of the chaos they have both set in motion.

As with the first two books, this is a relatively short volume by epic fantasy standards (340 pages in tradeback) and Deas packs a huge amount in. There are moments when a pause for breath might be appreciated, or subtler moments of characterisation might be expanded upon, but the ferocious pace of the series is one of its hallmarks, and Deas packs in enough side-detail to give the world the feeling of depth without resorting to filler. As a result it's a relentless read, though I'd recommend re-reading or at least skimming the first two books to reacquaint yourself with the storyline and characters, as Deas takes no prisoners with characters picking up exactly where The King of the Crags left them and carrying on without a pause for breath.

As the conclusion of the series, the book is extremely ruthless, with a startling number of major character deaths. It's also a somewhat messy finale, with numerous plot strands left dangling for future books. And yes, there will be more books in the same world, with another volume, The Black Mausoleum, already on the way to follow up on the ending of this trilogy. There is enough closure to make this book mostly satisfying, though those looking for happy, neat ending are directed elsewhere.

The Order of the Scales (****) is a fast-paced and violent conclusion to an interesting series, epic in scope but low in bloat and marked out by memorably vicious characters (scaled and unscaled). The novel is available now in the UK and will be published on 9 February 2012 in the USA.
Posted by Adam Whitehead at 15:35

Email ThisBlogThis!Share to TwitterShare to FacebookShare to Pinterest
Labels: stephen deas, the memory of flames, the order of the scales

The next series will divide its time roughly evenly between the dragon-realms and the Taiytakei. Who may shortly not be feeling quite so smug. Significant characters will return, including one we haven't seen since book one.