People have been wondering where Scott Lynch's Republic of Thieves and the English translations of the remaining books in Andrzej Sapkowski's Witcher series have gotten to for a while now. At great personal risk, I have managed to successfully snatch some nuggets of info from the secretive masters of Gollancz. 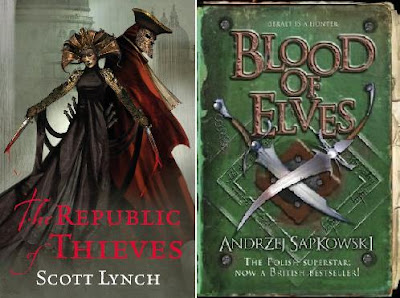 For The Republic of Thieves, the current plan remains to publish in November 2011, although this is not set in stone and is dependent on the final delivery of the manuscript. Gollancz have been working on parts of the book already and preparing it for production (shades of Voyager and Bantam's treatment of A Dance with Dragons), but a slip to 2012 hasn't been ruled out. Personally, given how heavy 2011 is with long-awaited and eagerly-awaited releases, a slip to 2012 for this book wouldn't entirely be a disaster. Though that said, getting the long-awaited Rothfuss, Martin and Lynch books in one year would be an interesting coincidence (and, combined with Abercrombie, Morgan, Erikson and Sanderson, will make next year's Gemmell Awards a total free-for-all).

For The Witcher books, apparently the hold-up has been to extremely tedious contractual issues which are now moving towards a resolution. Apparently once everything is sorted out, Gollancz (and presumably Orbit in the USA) will issue a statement about how they plan to get the rest of the books out.

So in both cases, no firm information, but definitely signs of movement on both fronts. What is good news is that Morgan's Cold Commands is now submitted and entering production, as is Christopher Priest's The Islanders, and both are on course for publication in the autumn.
Posted by Adam Whitehead at 00:38

Email ThisBlogThis!Share to TwitterShare to FacebookShare to Pinterest
Labels: andrzej sapkowski, news, scott lynch, the republic of thieves, the witcher

Agreed with Luke. A peep from him here or there would be nice, but I'm willing to give him all the space and patience he needs.

Thanks for finding out more about The Witcher saga, Werthead. Been concerned as to the release of future books, as the third release was supposed to be out this year but The Book Depository says 2012.

Oddly enough, I contacted ORBIT US about the next Sapkowski volume would be publishing and was told they wouldn't not be publishing the next one, but it wasn't on the foreseeable publishing schedules.

All the best wishes to Scott Lynch. He's one of my favorite authors and I hope he is doing well. Obviously no pressure, but would love to have an update on how things are going, whether that is an interview or a blog post or just a twitter update. :)

If they push back into early 2011, don't they run the risk of it bumping into the Wheel of Time finale?

It depends. A MEMORY OF LIGHT is, I believe, pencilled in for February (but it isn't finished yet, and in fact I don't think Sanderson is even a quarter done with it, so the potential for it to drop back further is there), so REPUBLIC could drop a month or two later with no problems.

It depends on how much of a crossover Gollancz think there will be between the audiences, and if Lynch would in fact benefit from coming out at the same time (so people go to get the new Jordan and find another new fantasy hardcover with a striking cover on the 'L' row below).