THE HOBBIT movies are named

It has been announced that the two movies based on The Hobbit will have the following subtitles. Part 1, due in cinemas on 14 December 2012, will be An Unexpected Journey and Part 2, due out in 13 December 2013, will be There and Back Again. 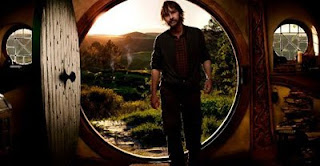 Jackson has also recently confirmed that Orlando Bloom will be returning to the role of Legolas. Whether this is for an extended appearance or will just be a cameo is unclear. Additionally, Jackson has also said (in response to questions on his Facebook page) that the two movies will include a subplot about Gandalf and the White Council attacking Dol Guldur, a plot kept firmly off-page in the novel.

Rounding off, Jackson posted a picture of Hugo Weaving (Elrond), Cate Blanchett (Galadriel) and Ian McKellen (Gandalf) planning the attack in some detail. Ahem.
Posted by Adam Whitehead at 18:43

That's some awesome magic weapons you have there!

Haha!
That picture is priceless!

Christopher Lee's definitely back for The Hobbit. The press release that announced the titles and release dates also lists him among the cast, the first official confirmation we have. His own website also had him down as returning, pending confirmation.