Peter Jackson and his producing partners have announced that their two-film adaptation of The Hobbit will be stretched to three films. Jackson had filmed a lot of material for the two movies which will have to be cut out due to time. After discussions with the studio, this material will be combined with new material (filmed early next year) to turn The Hobbit into a trilogy. 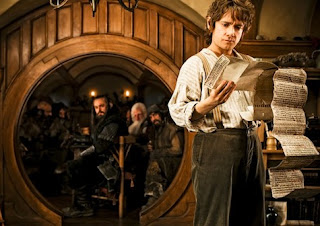 "Guys, it's the script for The Hobbit III: Fifty Shades of Gandalf the Grey. You do not want to know what Galadriel is doing with that elven rope in this scene."

At the moment it is believed that the first two movies will retain their titles of The Hobbit: An Unexpected Journey and The Hobbit: There and Back Again, and their planned release dates of December 2012 and 2013. The planned third movie will presumably be released in December 2014.

No suggested subtitles for it have appeared (expect fan suggestions such as 'The Search for Plot' and 'There and Back Again and Back Again as Long as They Keep Paying' imminently), but given Jackson's preferences for keeping Tolkien's names, a chapter title from The Hobbit or The Lord of the Rings could be pressed into service. Presumably it won't be The Hobbit: Queer Lodgings though. My preference would be The Shadow of the Past (a chapter title from The Lord of the Rings, used by Christopher Tolkien to title one of his History of Middle-earth books).

At the moment it is not entirely clear how this division would work. Originally Jackson envisaged one movie focusing on The Hobbit in its entirety and a second serving as a 'bridge film' to The Fellowship of the Ring. Later on, the two were combined with much of the bridging material now taking place simultaneously with the action of The Hobbit and the combined action broken across two films. Given the slightness of The Hobbit's plot, as depicted in the book, it would seem improbable that they could extend it across three movies, even if those movies are a lot shorter than the Lord of the Rings trilogy. If the plan is to retain two movies covering The Hobbit with the third film taking place afterwards, this could work better (and would allow sceptics to skip the third film if they really wanted to).

It's worth noting that Peter Jackson only has the rights to The Hobbit and The Lord of the Rings (and its numerous appendices). A great deal of background information fleshing out both The Hobbit and the period between it and The Lord of the Rings appears in the book Unfinished Tales and could be used to build a more comprehensive storyline, but Jackson does not have the rights to this book (or The Silmarillion or any of other post-LotR Middle-earth volume) and Christopher Tolkien has made it clear he will not sell the rights to them at any price. This would seem to somewhat limit the material that Jackson can draw upon for a potential third movie.
Posted by Adam Whitehead at 20:08

Maybe he's doing a Jordan and attempting to tell the story in real time.

Ugh. Although this has the potential for some long-term rewards, the impending wait for each movie has me deflated. Plus the book really isn't that long ... how long winded does he want to be?

Hmm, I'm a bit disturbed. Like you, I'm wondering how all of this is supposed to work, but you're actually more optomistic than me as far as coming up with ideas.

An Arrogant and Rather Rude Teenager said...

Hmmm not sure how I feel about this. Part of me is going "Woo hoo, more epicness, and in 2015 there'll be an innevitable 6-movies marathon!", the other part is thinking "Great, they are REALLY squeezing this thing dry."

I'm surprised Jackson doesn't have rights for Silmarillion as I assumed that's what the third film would be based on.

That subtitle to the photo cracked me up. :)

Jackson has said what's going to fill up the rest of the runtime: the Battle of Dol Guldur. You know, the awesome thing talked about in the Appendices where the White Council goes into Mirkwood and drives out the Necromancer (basically Sauron in human form). Which is unprecedented... but since Christopher Tolkien probably won't let any more movies get made, I like it.

He's going to add in a lot of stuff from the appendices... I have complete faith in Peter Jackson, I don't see him doing this solely to make money, he's doing it because this is basically his last chance to film Tolkien material.

Josh, I don't know what would be selfish about NOT snatching up that truckload of money he may get for more movie rights. He wants to protect his father's heritage from what he thinks are bad movies (and I have some issues with the LOTR movies myself so I can understand where he comes from).

@ Gabriele C - That would be fair, except my understanding is that Christopher Tolkien hasn't even seen the movies. Am I wrong in this? Someone more "in the know" please correct me if I'm wrong. But, if this is indeed so, then he's judging them sight unseen.