Brandon Sanderson delivers final draft of A MEMORY OF LIGHT

Brandon Sanderson has posted on his blog that he has delivered the final draft and revisions of A Memory of Light, the final volume in The Wheel of Time, to Tor Books. A few minor editing tweaks aside, the book - and the entire Wheel of Time series - is completed and done. 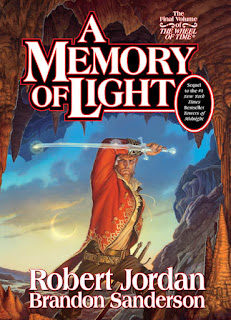 Robert Jordan started writing The Wheel of Time in 1984, publishing the first novel in 1990. Sanderson took over the writing of the series in late 2007, two months after Jordan's untimely death from a rare blood disorder. Working from vast amounts of notes and outlines prepared by Jordan in his final months, Sanderson published the twelfth and thirteenth novels in the series - The Gathering Storm and Towers of Midnight - to mostly positive reviews. Sanderson notes in his entry that he has been working on The Wheel of Time continuously for five years and, despite the rewarding nature of the work, he is now keen to return to his own worlds and stories. He has confirmed that the second novel in The Stormlight Archive series (originally entitled Highprince of War, but likely now to have a new title) will be his first priority.

A Memory of Light is currently scheduled for publication in January 2013.
Posted by Adam Whitehead at 19:26

Email ThisBlogThis!Share to TwitterShare to FacebookShare to Pinterest
Labels: a memory of light, brandon sanderson, news, robert jordan, the wheel of time

Not sure I would call the editing minor. They are taking this extra time to polish things precisely because of the issues with the last two books. Still a fair amount of work to do.

Since the final draft is now in I wonder if they will try and get it out for the Christmas market or if they will keep the original date and trust that it is a big enough release to do the business whenever it comes out.

I'm excited about this on two fronts: WOT is finally done! Although I have some complaints about the series overall, I'm still a fan. I started reading it in the early 2000s and stopped tracking it when I caught up to all that had been released. Now I can go back and read the entirety. That should account for several months of entertainment. Second, finally Sanderson can get back to his own work. He's one of my must-read authors, so I'm excited about it. In particular, I loved the first installment of the Stormlight Archives, so I'm looking forward to more, soon.

Shame about the cover. =/