The Woman in Black

London, the turn of the century. Widowed lawyer Arthur Kipps is sent by his office to deal with the legal affairs of Eel Marsh House, whose owners wish to sell it. He finds the local village folk uncooperative and fearful of the house, apart from rich landowner Samuel Daily (who owns the only motorcar in the village). As Kipps investigates the mystery of Eel Marsh House, he learns of a spate of unusual deaths amongst the local children and starts seeing a woman dressed in black watching his activities. 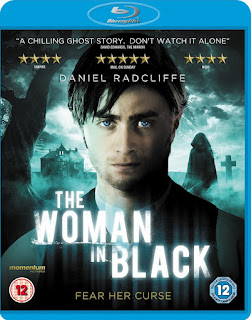 The Woman in Black is an adaptation of Susan Hill's 1983 novel of the same name. It was produced by the resurgent British company Hammer Film Productions, who in an earlier incarnation produced numerous horror films in the 1950s and 1960s. Unlike most of those films, which were noted for their use of blood and gore, The Woman in Black is a taut, claustrophobic piece which relies on tension and things glimpsed out of the corner of the eye.

The film's casting is superb, with a post-Harry Potter Daniel Radcliffe starring as Arthur Kipps (coincidentally, a role previously played by his on-screen father Adrian Rawlins in a 1989 TV movie based on the book). Radcliffe arguably risks more typecasting than any actor in film history, but his canny choice of stage and screen roles has seen him so far avoid that fate. In The Woman in Black he convinces in the role of the world-weary, grief-stricken father whose career as a lawyer is in doubt due to his growing disillusionment with the world. The only other major character is Samuel Daily, played with conviction by the always-excellent Ciaran Hinds.

The director, James Watkins, handles the material well. His depictions of a village consumed by fear, the huge and rambling Eel Marsh House and of lonely and windswept marshlands are all excellent, giving the film a real sense of place. Knocking in at just 95 minutes, the film also doesn't outstay its welcome.

Unfortunately, the movie shows its hand a little too early. Upon arriving in the village, Kipps is immediately greeted by fear, suspicion and terror, letting the audience know that All is Not Well. It's not long before just about every time we get a close-up on Kipps we also get some sinister stuff going on in the background, or every other time he turns around we get a shot of the Woman in Black hanging about for a moment. The first few times this happens, it's unsettling. Somewhere around the twentieth, it loses its power. Viewers will soon find themselves predicting when something 'scary' is about to happen and will, by and large, be right. The film does succeed in achieving a few genuine shocks despite this issue, the movie's second half is overall weakened by this predictability. Given writer Jane Goldman's solid form (Stardust, Kick-Ass, X-Men: First Class), it's surprising that she doesn't put more genuine twists into the script, especially given its deviations from the source material.

The Woman in Black (***½) is well-made, excellently-acted, concise, focused and well-directed. The film is let down by its script, which relies a little too much on a single scare tactic and overplays it to the point of boredom. In this manner, The Woman in Black is the film equivalent of the computer game Doom 3: well-made, great in short bursts, but a little dull over the long haul. It is redeemed somewhat by a startling ending, however, and is certainly worth watching. It is available now in the UK (DVD, Blu-Ray) and USA (DVD, Blu-Ray).
Posted by Adam Whitehead at 09:39

Email ThisBlogThis!Share to TwitterShare to FacebookShare to Pinterest
Labels: the woman in black

A decent flick, but my main gripe with it was that they totally chickened out on doing the book ending, which was (for me) the most frightening part of the tale...and the way they ended it in the film was just silly.