Rockstar have released a tiny amount of additional information on the upcoming Grand Theft Auto V. 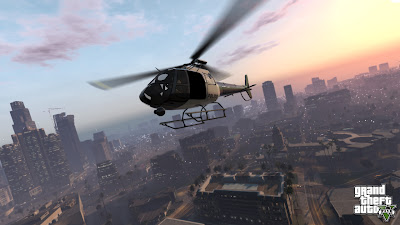 They have released two screenshots. The one above is the more interesting, depicting the sprawling city of Los Santos (apparently the biggest city in a GTA game to date) from what appears to be a commandeered police helicopter. Does the presence of large suspension bridge hint that GTA5's version of Los Santos will be more of an amalgamation of Los Angeles and San Francisco? Possibly. The other screenshot is rather more chilled out: 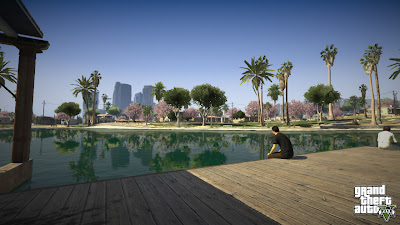 A release date for GTA5 has not yet been mooted. However, Rockstar are adamant that they're not going to talk about the game too much in the near future. This to me suggests that a 2012 release date is now impossible (compare the amount of attention that Dishonored, not due until October, is now getting in the gaming press) and we will most likely see the game in May 2013. The spring is a more favoured date for Rockstar and is perfectly situated so as to catch the largest amount of attention before Sony and Microsoft wheel out their new consoles at the end of the year.
Posted by Adam Whitehead at 23:02