Raymond E. Feist's debut novel, Magician, is getting some new cover artwork, presumably to tie in with the novel's impending 30th anniversary and the release next year of the very last novel in the Riftwar mega-saga. Here it is: 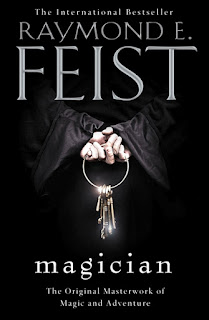 Hmm. Considering that Magician is an epic fantasy war story spanning twelve years, two planets and involving thousands of warriors and wizards fighting one another on a truly vast scale, "Hooded guy holding some keys," isn't really cutting it for me. The new edition will be published next month in the UK.
Posted by Adam Whitehead at 21:29

I'm inclined to agree. Plus the font and lack of capital M is incredibly underwhelming.

Oh, great, a guy in a hood. That's innovative.

Put me down as another agree on the underwhelming front. Magician is epic on every front and that cover certainly doesn't convey that.

I will agree on the weird cover too. It's a decent cover but doesn't really match the feeling of Magician.
I still like my greek covers more :P

My first read of the book 2/3 the way through and loving it, hey, yeah the cover is a little subdued for an Epic, old magician handing new magiciAN THE KEYS to his spells?.......maybe a good cover for a book called "locksmith"

Hooded guy? You cant see hes hooded aha. As opposed to the old cover here in Australia this one is much better Id say. It isnt amazing but i prefer it over my cover