In 1987 Paramount undertook one of the bravest gambits in their history. They revived their most famous franchise, Star Trek, as a new, ongoing television series. Unable to afford to bring back the original actors, they created a new ship and a new crew, boldly going where no-one had gone before roughly a century after the events of the original series. Everyone expected the new series to flop badly, but instead it was an instant smash hit. 27 million people watched the pilot and the show would go on to last for seven seasons and 178 episodes (a hundred episodes more than the original series). It spawned no less than three spin-offs (the superb Deep Space Nine and the somewhat-less-accomplished Voyager and Enterprise) and led to a resurrection in small-screen SF shows of all stripes. 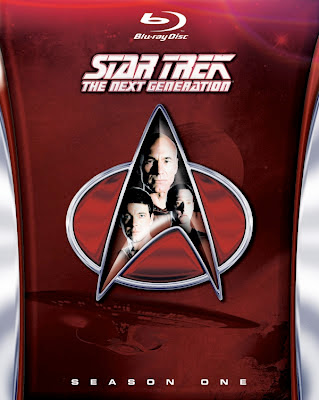 It would be fair to say that the series did not start off at its most promising, however. The show spends most of its 25-episode first season finding its feet. Fierce behind-the-scenes battles between Gene Roddenberry and his writers resulted in some muddled scripts, whilst Roddenberry's own vision of an egalitarian, equal future are let down by some dubious sexism (it's not until quite late in the season that the female characters get some interesting storylines and cool moments) and racial stereotyping (the episode Code of Honour is particularly wince-inducing in this regard), severe enough to draw criticism from the show's own star.

What saves the first season from early disintegration is Patrick Stewart's thoughtful and intelligent performance as Captain Jean-Luc Picard. Stewart hits the ground running and never gives anything less than 100% to the role and to the scripts, regardless of how hammy the dialogue or how embarrassing the storyline. His co-stars are more variable but generally improve as the season goes along, with arguably only Denise Crosby not hitting the same level of quality as the rest of the cast by the end of the season. Brent Spiner, in particular, embraces his role as the android Data with enthusiasm and aplomb.

It can also be said that, generally, the season improves as it goes along. Early episodes include the aforementioned stereotype-filled Code of Honour and the excruciatingly awful Justice (Jogging Aryans try to kill Wesley Crusher for crushing a flowerbed but relent when even their own Space Alien God thing realises this is lame). Elsewhere, the likes of Where No-One Has Gone Before and The Last Outpost hint at potentially interesting ideas, only to be weakened by sloppy execution. The failure of the Ferengi to impress as villains and the difficulty of using the super-powered Q (a fine performance by John de Lancie) too frequently both leave the show without a convincing set of antagonists, although the rise of the Romulans as a threat towards the end of the season does alleviate this issue. Later on we have more solid episodes like 11001001 (which sets up an intriguing alien race, only for them never to appear again), The Arsenal of Freedom (a brainless but nonetheless effective action episode) and Skin of Evil (which, despite one of the worst alien costumes in the show's history and some poor voice work, does offer up some solid dialogue and the biggest shock in the entire show's run), whilst even weaker episodes show some promise. Angel One has an unappealing premise (the crew visit a planet where women are the 'dominant' gender) but there are some surprising flashes of competence (particularly the notion of the women of the planet being larger and stronger than the men, who are all played by actors of limited height) before it falls apart into embarrassing sexism. Symbiosis sets up a genuinely unsettling and complex moral mess for Picard to deal with, but sabotages it with an awful, "Drugs are bad, m'kay," message.

A special word must be reserved for Conspiracy, probably the most unexpectedly violent episode in the entire history of Star Trek and certainly the goriest, featuring people's heads exploding after being hit by phaser blasts and monstrous creatures (though awfully-realised) eating their way out of corpses. For those planning to revisit the series with younger children, caution is advised with regard to this episode.

Ultimately, the first season of Star Trek: The Next Generation is horrendously uneven. Even the worst episodes usually have flashes of competence, but there is a notable lack of really strong, totally satisfying episodes (Datalore and Heart of Glory probably come the closets, but even they have problems). That said, there is a certain amount of enjoyment and interest to be gained by seeing the cast improving episode-by-episode, and certainly by seeing the impressive remastering job that has been performed on the series.

To bring Star Trek: The Next Generation to high definition, a team of editors had to fully re-edit and reassemble every single episode from scratch. This involved retrieving the original film canisters (all 25,000 of them) from storage and re-inserting every optical effect in the series. It was a huge job, apparently taking some six months and costing more than $9 million for the first season alone (hence the somewhat high price for the Blu-Ray set). However, their work has paid off. The show now looks like it was filmed yesterday, with the re-editing of the show using modern equipment having the most satisfying side-effective of eliminating all bluescreen artifacts from the series. Matte lines around spaceships are now a thing of the past and the slight discolourations as characters passed in front of viewscreens or windows are now gone. The series looks vivid and impressive, fifty times better than it ever has before. Each episode is also accompanied by its trailer which remains in standard-definition, allowing viewers to see how effective the re-mastering has been.

This first season release is also accompanied by a number of new documentaries, featuring new retrospectives from the cast and crew on its creation as well as the new editing team on the remastering job. These documentaries are a welcome addition, featuring some interesting perspective and trivia about the series. All of the special features from the 2002 DVD release have also been included, albeit still in standard definition.

In terms of quality of the episodes themselves (***), the first season of Star Trek: The Next Generation can be said to be 'watchably disappointing'. However, the fantastic remastering job and the extra content rise the overall quality of this set (****) to something far more worthwhile and interesting. The series is available on Blu-Ray now (UK, USA).
Posted by Adam Whitehead at 23:53