2127. The Ross ice shelf has shattered due to volcanic activity and much of Antarctica's ice has fallen into the sea, raising global sea levels by seven metres. Three billion people - a fifth of the human race - have been displaced, triggering the greatest economic and humanitarian crisis in history. With Earth's governments and metanational corporations distracted, the colonists on Mars have launched their second revolution. 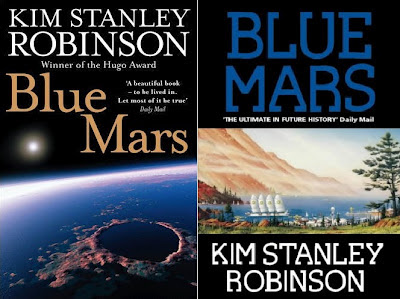 The surviving remnants of the First Hundred - whose lives have been extended vastly by genetic treatments - are spearheading the revolution. Their hope is to forge a new relationship with Earth based on mutual respect and understanding, but to the teeming billions of Earth Mars is an escape route, a place to begin again. In the aftermath of revolution, a new way of existence has to be found if the human race is to prosper.

Blue Mars is the third and concluding volume in Kim Stanley Robinson's epic Mars Trilogy, his account of the colonisation and terraforming of Mars extending across almost two centuries of human history. It opens with the Second Martian Revolution in full swing, picking up from the cliffhanger ending of Green Mars. The city of Burroughs has been flooded and most of the UN and metanat forces have been forced to pull back to the city of Sheffield atop Pavonis Mons, where a space elevator links Mars to space. The opening sequence of the book depicts the battle for Sheffield, which is followed by politicking as different factions from both Earth and Mars try to create a peaceful resolution to the crisis.

Blue Mars is similar in general style to the first two books in the sequence, with atmospheric passages on the terraforming of Mars and descriptions of the ever-shifting environment coexisting with lengthy political musings and notable scenes of character development. Robinson focuses the somewhat rambling nature of Green Mars by presenting much of the third book through the viewpoints of two of the First Hundred: Sax Russell, the scientist-genius who made most of the terraforming possible and has been the leading advocate of the 'Green' position (the total terraforming of Mars); and Ann Claybourne, the geologist who has never believed that terraforming was moral and is the leading exponent of the 'Red' viewpoint. By the time of Blue Mars, with the planet's atmosphere mostly breathable and liquid oceans appearing in the north and in the vast Hellas Basin, it appears that Sax has won the argument by default, but Robinson challenges this by showing Sax's dissatisfaction with the process and his growing realisation that something special has been lost with the destruction of the 'old' Mars. Simultaneously, Claybourne realises - belatedly - the value of being able to experience Mars first-hand without the need for spacesuits.

The two viewpoints and their newfound convergence stands as a metaphor for the entire novel. The Martian position that immigration from Earth should be banned before it overwhelms their still-fragile biosphere, and the Terran position that their planet is choking to death on people and as many as possible need to be dumped off-world, likewise need to find common ground to the benefit of all, as do the tendencies of corporate-driven right-wing politics and those of the liberal left. If Blue Mars has a theme it is that compromise, if often unsatisfactory to everyone, is the only way that society can function and move forwards. 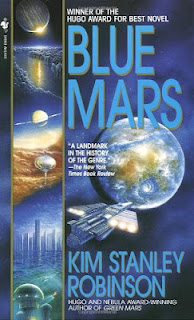 This may be stating the obvious, but Robinson nevertheless explores the theme in tremendous depth. The political bias which infested Red Mars is much more moderate here, with Robinson showing that the huge corporations do have some positive roles to play in the future affairs of both planets, although some traces of naivete remain, particularly when a right-on member of the First Hundred wins a debate by making some pithy remarks, awing his political opponents. Those who despise politics may find the novel a little dry for their tastes, but may also enjoy the growing cynicism of the First Hundred, whose lengthy lifespans have allowed them to see the cyclical nature of politics and social movements and grow bored with them.

It's arguable from the second volume that Robinson made a mistake in killing off his most dynamic POV characters in the first novel, with the surviving members of the First Hundred being a little too passive to embrace fully as protagonists. These lingering doubts are removed in this book, with Nadia, Maya, Michel and particularly Sax and Ann working well as our principal characters (with second-generation Nirgal and Art, a liaison with an Earth metanat, also putting in good work as viewpoint characters). Their extended lifespans, which could easily be dismissed as a convenient plot device to save Robinson the complexities of writing a multi-generational storyline, have come at a cost, one that Blue Mars dedicates a lot of its closing chapters to exploring. These long lives also give them a unique perspective on events, ranging from tried cynicism to delight at seeing new generations coming into the world, which Robinson enjoys exploring.

Like its predecessors, Blue Mars is as much a social textbook and a scientific treatise and thought-experiment as it is a novel. There are some dynamic action scenes earlier in the novel, but for most of the book events are slow-paced and descriptive. Robinson is describing the social, scientific, economic, philosophical and even military implications of the terraforming of Mars on a broad base. For those interesting in such matters, Blue Mars is as easy to recommend as its two predecessors. For those interested in a more straightforward, plotted novel with a much tighter focus across a smaller passage of time, Blue Mars is as likely to disappoint as Green Mars before it.

For myself, Blue Mars (****) is an effective conclusion to one of the most ambitious SF projects of all time. Robinson's writing is at its strongest in this novel, as he attempts to fuse hard SF with real literary ambition and comes close to succeeding. The concluding chapters in particular deliver a terrific emotional charge as, after two thousand pages, the story of these flawed people and the world they have transformed finally ends. The novel is available now in the UK and USA.
Posted by Adam Whitehead at 20:12

I've seen these books a lot of the past couple of years but always dismissed them because I've never been a fan of sci-fi ... might give them a go one day and they do sound interesting.

I've only read the first novel in the trilogy, and it really impressed me. It wasn't the greatest page-turner I've ever encountered, and one could legitimately argue about its political bias, but there's no doubt in my mind that Red Mars is one of the most intelligent and ambitious novels I've read, with real-life applicability now that we have had the last couple Presidents talking very seriously about sending men to Mars.

I'm intrigued by your review of this final novel, and while before I had felt that it might be enough to just have read Red Mars, I'm considering making my way through to the end. Which of the three do you think is Robinson's greatest effort, and to what extent do you feel that only reading the first novel is leaving huge gaps?