It's been widely speculated for a while that Bethesda would be setting Fallout 4 in Boston, Massachusetts. That speculation has gained some credence with reports that Bethesda writers and researchers have been spotted in Boston undertaking research for an upcoming game. 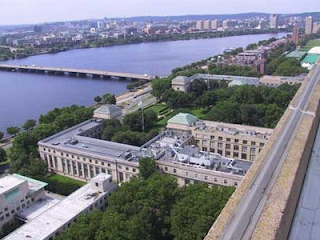 MIT, Boston. Expect to see a Fallout-ised version of this vista if the rumour is correct.

Fallout 3 featured multiple references to the Commonwealth, a small nation established in the ruins of New England following the apocalyptic war. Several characters were featured who hailed from 'the Institute', widely taken to mean the Massachusetts Institute of Technology (or its Fallout equivalent). With Bethesda apparently planning to steer clear of the traditional Fallout stomping-ground of the California/Nevada/Arizona area (the setting for the first two Fallout games and the more recent New Vegas), fans had been speculating that either the Commonwealth or New York would be the focus for Fallout 4 and this now seems more likely.

According to Bethesda, their next game would feature the Creation Engine used by Skyrim (an updated version of the Gamebryo Engine used on all their titles from 2002's Morrowind through 2010's Fallout: New Vegas). Some Fallout fans had been hoping that Bethesda would farm out Fallout 4 to Obsidian, the company behind the excellent New Vegas, whilst they themselves would focus on The Elder Scrolls VI. Clearly this is not the case, with Bethesda now looking like they'll be alternating franchises, perhaps letting other companies come in to handle other projects along the way.

The use of the Creation Engine suggests that Bethesda envisage Fallout 4 as a current-gen title, which is odd given that the new consoles will likely launch no later than the start of 2014 and that seems a little too soon for Fallout 4. It's possible that Bethesda will release low-spec versions of the game for the current-gen consoles and upgraded, more advanced ones for PC and the next gen machines. I doubt Fallout 4 will arrive before the middle or end of 2014 at the earliest, if not later.
Posted by Adam Whitehead at 15:44

Because I had little else to do, a few weeks ago, I contemplated my favorite games of all time, and it was hard to displace Fallout 3 from heavy consideration. I enjoyed New Vegas well enough, but something about setting and vibe of F3 is just super-hard to top, in my book. Having the fourth one in Boston will be terrific, I'm sure... I really hope they get someone as cool as Three Dog to spin the tunes in F4, since Wayne Newton did nothing for me in NV...

Anyway, thanks for posting this story. It cheered me up when I read it...