Whilst Batman Begins were merely a successful superhero movie, its sequel, The Dark Knight, was a bona fide phenomenon. The movie was both critically acclaimed and hugely successful, making over a billion dollars at the box office. Director Christopher Nolan hesitated over making a third film, worried it could not possibly live up to expectations (especially given that the tragic death of Heath Ledger meant that the Joker could not return). Ultimately he decided to embrace the challenge and has delivered a - somewhat - satisfying resolution to his take on the Dark Knight. 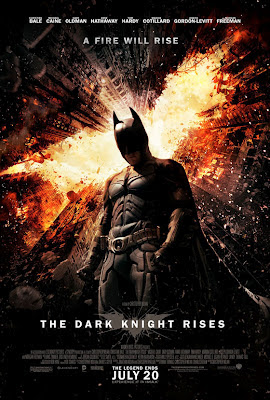 Picking up eight years after the events of The Dark Knight, Gotham City is now virtually crime-free thanks to laws passed in the wake of Harvey Dent's death. Batman (who took the blame for Dent's death) has disappeared, with Bruce Wayne now living in seclusion. Commissioner Gordon, guilt-ridden by both keeping the secret of Dent's insanity and death and Batman taking the fall for it, is planning to retire. Suddenly, the city is plunged into chaos by the arrival of Bane, a former member of the League of Shadows who is planning something audacious. Wayne is forced to don the mask of the Batman once again...

Drawing on elements from the comics - most notably the Knightfall arc - Nolan has created yet another story in which Wayne's character is dragged through the wringer. From the start we know this is not going to be as dark as the previous movie: the title and the thematic direction of the movie are both about redemption. Wayne is haunted and trapped by the decisions he made previously and cannot move on, despite entreaties from Alfred to do just that. When Wayne Manor is robbed by a clever thief, Selina Kyle, Wayne is reinvigorated and gets back in the game, just as the true threat from Bane becomes apparent.

The Dark Knight Rises is driven by Nolan's typically intense direction and some exceptionally good performances. After being a bit lost in the mix in the previous film, Christian Bale brings his A-game to this movie and forms its heart. As usual, Michael Caine gives excellent support as Alfred and Gary Oldman continues to be brilliant in every scene. However, it's the newcomers which really impress. Anne Hathaway is particularly excellent as Selina 'Catwoman' Kyle, with an angst-ridden character that rivals Batman (though with a superior line in caustic humour). Joseph Gordon-Levitt is also superb as the police officer determined to live up to Batman's ideals, whilst French actress Marion Cotillard does great work as Miranda Tate (really impressing in a small role). Unfortunately, Tom Hardy's impressively physical work as Bane is undercut by a somewhat unconvincingly campy vocal performance. Intermittently disturbing, Bane's voice veers too much from the unintelligible to the ludicrous to be truly effective.

As usual, there are both great action setpieces and a laudable focus on characterisation, with several of the most powerful scenes in the movie being dialogue exchanges between Wayne and Alfred, or Wayne and Gordon-Levitt's Blake. Nolan also overcomes The Dark Knight's biggest issue, its dodgy pacing, by making the story in Rises bigger and giving more work to do to the supporting characters. Still, whilst the story is paced better it's still very long at just under three hours and the movie can't quite sustain interest consistently over its full length.

Where The Dark Knight Rises runs into problems is the underlying conflict of the whole series, namely how well Nolan's more realistic take on the franchise can mesh with its sillier excesses. Nolan's dedication to keeping it (relatively) real is stretched thin in the latter part of the film as the situation gets increasingly ludicrous and some contrived double-crosses and plot twists not so much dent disbelief as completely shatter it. After two movies spent dodging cheese and corn, Nolan can't quite keep up the dance any more and there are some groan-inducing lines and moments as the movie draws to its climax.

The Dark Knight Rises (***½) is a decent ending to the trilogy, with excellent performances and atmosphere let down by the decision to embrace cliches rather than subvert or challenge them. The ludicrously bombastic score doesn't help either. However, Nolan has still managed to deliver the best third entry in a superhero franchise of all time and the movie remains extremely entertaining. It is on general release in the UK and USA right now.
Posted by Adam Whitehead at 11:44

I agree with most of what you said. I had a few problems with the film.

1 - The movie felt too rushed at the start. While the audience knew the threat Bane represented they never really explained how the characters reached that conclusion. One minute the city is at peace and the next Batman is coming back and the police are out in force. All because a bunch of guys have set up shop in the sewers. I would have liked to see a lot of crime being committed in the city or something to justify the response.

2- It seemed out of character for Nolan's Batman to be walking around with Catwoman. In the first film Batman was more of a ninja, preferring the dark and the element of surprise. In this movie he is walking around having conversations while dressed up in the costume. It just didn't feel right. And that isn't even mentioning the Braveheart battle at the end in broad daylight. Where were all the guns???

I totally agree about the cheese factor Adam.

The good part about Batman Begins and The Dark Knight, was even though they are ridiculous, you could still convince yourself it was a realistic movie.

The last act of The Dark Knight Rises went over the edge and this is what disappointed me.