The American cable channel SyFy has picked up the rights to the planned Blake's 7 remake that's been doing the rounds in Hollywood. 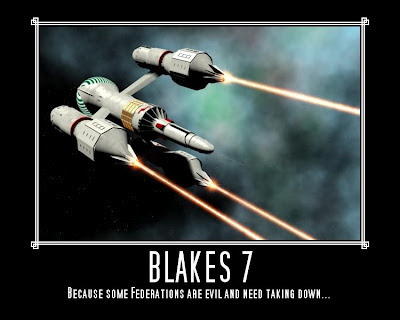 Interesting news. SyFy, which has lost all of its future-set, space-based SF shows in recent years, has been making noises about getting back to making 'proper' SF shows. Given the success of Battlestar Galactica (yet another space opera that began 1978 and was rebooted to great success), it's unsurprising that they'd look at the Blake's 7 project. I must admit, given their timidity about new SF projects (such as shelving the completed BSG spin-off pilot for the time being), they seem to be pretty bullish about the new show. They've agreed to skip the pilot stage and, if they like the first script, commission a 13-episode season straight off the bat.

Martin Campbell (director of the James Bond movies Casino Royale and GoldenEye) will be directing the first episode of the new series, assuming a full season order is given.
Posted by Adam Whitehead at 20:20

Very interested in the prospect of a "Blakes 7" revival, I watched the show way back when it was first on TV, though somewhat anxious about what SyFy is likely to do with it. Hopefully they like the script enough to go forward with a first season, and it's true to what Terry Nation originally wrote.

Huge shoes to fill though for an actor as good as Paul Darrow for Avon.

That's is both wonderful and terrible. SyFy (who rejected Sci-Fi) is notorious for gutting great shows yet every now and then they get it sooooo right. First and foremost they did a gave us the new BSG which was arguably the best Sci-Fi television show to ever originate be produced for their network. So I guess I can always hope.
Its in the bag.