The Dirty Streets of Heaven by Tad Williams

Bobby Dollar is an angel who serves as an advocate for the recently deceased. Whenever someone dies, their soul is fought over by Heaven and Hell, with advocates from both sides competing for it. Dollar's latest case is complicated when the soul in question vanishes, and even the infernal legions of Hell seem at a loss as to what's going on. As Dollar investigates, he uncovers ancient conspiracies, political infighting even amongst the ranks of the angels of Heaven and that he himself has been targeted by every supernatural gang in California. He just doesn't know why. 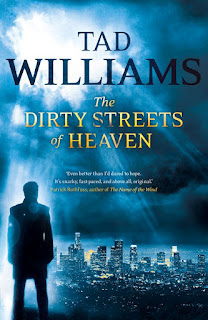 The Dirty Streets of Heaven is the opening novel in the Bobby Dollar series by Tad Williams. Williams is best known for his shelf-destroying epic fantasies and the extremely slow pace of his novels. His recent Shadowmarch series suffered from a glacially ponderous structure that sometimes threatened to spill over into outright boredom. However, Williams's move into urban fantasy has been like a shot of pure storytelling adrenalin. The Dirty Streets of Heaven moves like a whippet with its tail on fire.

The book outlines its ground rules early on: Heaven and Hell are real, but their forces have been in a state of uneasy peace (or a Cold War) for millions of years. Complex rules govern their interactions. The relationship between the two sides shifts by location; Muslims, Jews and those of other faiths experience different results to those of nominally Christian denominations. Also, being an atheist is no help either. Spirits in Heaven have their memories wiped of their mortal lives, allowing them to start over, whilst those in Hell are damned by their previous actions and forced to recall them vividly. Given the low-key nature of a lot of urban fantasies, it's interesting to see Williams outlining an epic backdrop right from the very start.

Bobby Dollar is our only POV character (the novel is told from the first-person) and is a complex individual, nominally on the side of Light but a bit too fond of mortal vices like sex and drink. His superiors despair of his methods, but he gets results and remains loyal to the Highest (who hasn't been seen or head in eons), so is tolerated. Dollar has a bunch of allies and helpers, such as fellow angel Sam (who he was in the angel special forces with) and a superb information-broker who has unfortunately been cursed into a reversed werepig, only lucid and capable of intelligence speech between the hours of midnight and dawn when he is in the shape of a pig. 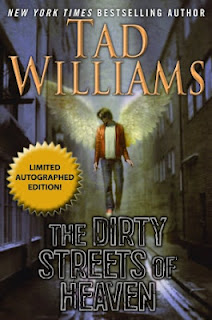 Freed from the language and technological constraints of medieval fantasy, Williams goes to town in this novel. The author is clearly having a lot of fun as he hits the reader with a lot of inventive ideas, fast-paced action scenes and decent moments of character introspection. The relatively short length (400 pages makes the book a novella by Williams's normal standards) means that the pace has to be fast and furious, packed with plot twists and revelations

The only complaint that the solution to the mystery in the book relies a little too much on the metaphysics of the setting, which have not been fully explained, so it's hard for the reader to solve the puzzle themselves (half the fun of a good mystery).

Beyond that, The Dirty Streets of Heaven (****½) is Williams on top form, delivering a page-turning, highly inventive, fun read and his best book in a decade. The novel will be available on 4 September in the USA and on 13 September in the UK.
Posted by Adam Whitehead at 17:30

Awww, jealous. Didn't get a hold of a review copy.

I loved Shadowmarch series, but I'm not sure if I'm going to read TDSoH. Urban fantasy is not my cup of tea.

What Adam said.
The only urban fantasy I loved before this is Neverwhere by Neil Gaiman.
This is a fun and gritty detective novel told by someone who knows how to write epic and detailed and now proves that he can create a world just as well with less words. This book for all its differences is still written by the same author you loved for Memory Sorrow Thorn, Otherland or Shadowmarch (which one could argue is a bit lenghty at times). It is obvious in the depths of Bobby Dollar's musings in the moral issues that are raised en passant between a car chase with a Balrog and the arguing for a soul against an advocate of hell.
Read this as soon as you can and thank you so much Deb for my advanced copy - I'll reasure it.

Typo in the last sentence. Darn.
Could you please fix this oh board masters?

VERY interesting! I'm only just beginning to get into urban fantasy, and was in despair that it was all vampires and werewolves in city settings with swooning teenagers everywhere. Thank you for this, and for the mentions of other books I can check out!

Have you started reading "Forge of Darkness" yet Wert? Will be interesting to see your review of it.

"The Dirty Streets of Heaven moves like a whippet with its tail on fire."
That's just awesome cause I always thought Tad was trying to kill his readers with novels eloquently written so you don't wanna stop reading and so slow you wanna pull your hair out and can't possibly read on without excruciating pain

Interesting to see this readers point of view but I disagree with the opinion on Tads other books. I loved that he did something different here and went in to urban fantasy.

I can't fix the typo. I can delete it and you can repost?

Re FORGE OF DARKNESS, I have a copy and it'll be the next book I read after the current one.

Thanks for the note and the offer, Adam. I think I can live with it (and the one in the post asking to fix it) and just try to pay more attention to my typing next time!