Emma Bannon is a powerful sorceress in the employ of Victrix, Queen of England, vessel of the god-spirit Britannia and ruler of the Empire. Archibald Clare is a mentath, a human capable of staggering feats of logic and deduction. When other mentaths start turning up dead on the streets of Londinium, Bannon and Clare have to join forces and uncover the reasons for the deaths...and the nature of a conspiracy that threatens the nation. 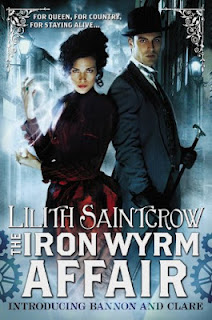 The Iron Wyrm Affair is a curious hybrid of alternate history, fantasy and steampunk, with a dash of SF added to proceedings (mentaths essentially being mentats from Dune). The early part of the novel struggles as Lilith Saintcrow tries to find a way of simultaneously balancing these elements, introducing the characters and establishing the plot without it all falling into a mess. She succeeds mainly by adopting a, "Damn the torpedoes, fall steam ahead!" approach and trusting the reader to stay with her. This pays off about a third of the way into the book, when it starts to fulfil its billing as a glorious alterno-history romp through a Victorian England that never was.

So we have a book that features mustachioed Italian assassins, German engineers who become enraged after being denied breakfast, and ancient dragon-spirits lurking in the slums of the city. There are steamborgs and primitive mecha, sorcerous duels and Holmesian moments of impressive logical deduction. The book has its fun factor turned up fairly high, but Saintcrow mixes in some nice moments of characterisation, particularly of Bannon who has a complex backstory. Archibald Clare is more straightforward, but Saintcrow includes some interesting elements to his character, such as his not-very-mentath-like ability to reason away the unreasonable (such as the existence of sorcery, which drives many mentathes insane due to its irrationality).

After a slow start, the pages start flying as the conspiracy is unravelled, the stakes are raised and the pace quickens. Events culminate in a grand, explosive finale, the hints of further adventures to come and, of course, the consumption of a well-earned cup of tea.

The Iron Wyrm Affair (***½) is a solidly-executed novel which combines several genre elements into a successful whole. It's definitely at the more lightweight end of the genre spectrum, but remains an entertaining read. The novel is available now in the UK and USA.
Posted by Adam Whitehead at 13:01