Guardians of Paradise by Jaine Fenn

Taro and Nual are Angels, formidable assassins who have discovered that the Sidhe - the long-defeated former slavemasters of humanity - have secretly returned and are undertaking clandestine operations against human interests. Their attempts to expose the truth to the rest of human society lead them into a meeting with Jarek Reen, a space trader who has had his own run-in with the Sidhe, and the formation of an alliance to bring the Sidhe down. 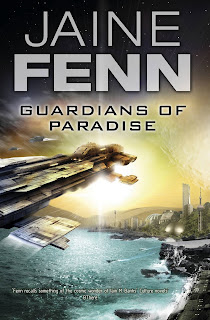 Guardians of Paradise is the third (of, currently, five) novels in the Hidden Empire sequence. The first two books in the sequence featured completely different characters operating on different worlds, whilst this third book brings them together and sees them pool resources to defeat the Sidhe. You can read either Principles of Angels or Consorts of Heaven first, but you need to have read both to fully appreciated Guardians of Paradise.

Like its two predecessors, Guardians of Paradise is entertainingly-written and is an easy read. Unfortunately, it lacks the dash of New Weird that made Principles of Angels so promising and threatens to languish at the same 'nice but unexciting' level as Consorts of Heaven for much of its length. The bulk of the book takes place on Kama Nui, an exotic water world which serves much of human space as a resort planet. Its inhabitants are restrained from killing (even during wars and political intrigue) by severe social customs, which reduces the level of tension to our characters (lessened even more by Nual's formidable powers) but does increase the plausibility that they could survive the situations they encounter on the planet (especially Taro, who is still green as grass in his role as an assassin).

Characterisation of the central trio of characters is adequate, but also a bit perfunctory. Other characters flitter in at the edges of the story (especially the Sidhe), but a major problem with the book is that there is little feeling of a bigger culture or society beyond what is going on in the plot. The worldbuilding is highly concentrated on the areas around our characters, but our knowledge of the wider human society beyond that is almost non-existent. Whilst this is efficient and certainly keeps the page count down, it also harms immersion in the story.

That said, an uninspiring first half takes a dramatic upward swing once our characters move into a position to confront the Sidhe directly. A rather unexpected element of horror enters the story at this point, with the revelation that there may be more threats out there than just the Sidhe, and suddenly the story and the writing kick more decisively into gear. The final section of the book is more enjoyable than what came before, with the characters and storyline clicking more decisively, and things end on a ambiguous, disturbing note.

Guardians of Paradise (***½) recovers from a stodgy first half to become a decent, compelling SF novel. It's still a bit lightweight compared to the bigger names in the genre, but certainly there are signs of Fenn developing into a more interesting and talented author. The novel is available now in the UK and USA.
Posted by Adam Whitehead at 18:25