Paris, 1931. Hugo Cabret is a young boy living in Gare Montparnasse, a railway station. He has no family and is trying to salvage parts to fix an automaton, believing it contains a message from his late father. Constantly hunted by the Station Inspector (who delights in finding orphan boys and sending them to the orphanage) and thwarted by a toy stall owner who takes his father's notebook, Hugo's quest seems doomed...until he discovers another piece of the puzzle. 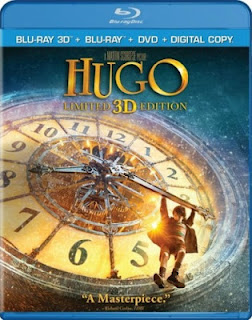 Hugo is director Martin Scorsese's tribute and love letter to the pioneering days of the cinema. The director's first family film and his first movie made in 3D, it's a bit of a new direction for him but also one that he embraces. Hugo is vibrant, colourful, entertaining and amusing, let down only by a slightly excessive running time.

The movie hinges on the central performance of Hugo and actor Asa Butterfield (best known for playing the young Mordred in the British TV series Merlin) does great work in the role, nailing the loneliness of the young boy looking for a place in the world. Chloë Grace Moretz (Kick-Ass, Let Me In) is equally capable in the role of Isabelle, a young girl who befriends Hugo and encourages his quest. Older, more established actors like Ben Kingsley and Christopher Lee also bring their A-games to the movie, with Kingsley particularly successful in his role as real-life movie pioneer Georges Méliès. Arguably the biggest revelation is Sacha Baron Cohen, who leaves behind his increasingly predictable comedic roles (though not entirely his comedic talents) in the role of the Station Inspector, initially presented as a straightforward antagonist who becomes more nuanced as the film progresses.

Visually, the film is a delight. Scorsese uses a combination of sets, CGI and illustrations to create a vivid, exaggerated version of the real world. Scorsese makes the slightly 'false' look of CGI into a virtue, using it imaginatively and contrasting it against the much more primitive effects of early 20th Century cinema, but which were equally groundbreaking in their day. Scorsese is well-known as a film historian and a keen preserver of old movies as well as a director, and he combines these interests with a solid storyline (adapted from an award-winning book by Brian Selznick) to create a film that is close to his heart. Crucially, however, he prevents the film from tipping into self-indulgence by ensuring that these elements are driven by the story rather than any kind of lecturing.

Where the film stutters is its pacing. For a film meant to appeal to children as well as adults, the two-hour running time is a bit long for such a slight story, especially one where the writer and director have to keep contriving dramatic situations out of misunderstandings which could be solved in a single line of dialogue (why does Hugo never tell Georges that the notebook is his father's? Why doesn't he tell the Inspector that Georges is now looking after him?). This problem is accentuated by the presence of under-developed sideplots, such as the Inspector's faltering attempts to romance a flowergirl (a heavily under-used Emily Mortimer), Christopher Lee's lack of screentime and an amusing but very slight storyline involving two station workers (Richard Griffiths and Frances de la Tour). Perhaps expanding these storylines and dropping some of the repetitiveness of the main storyline might have been a better idea and could have filled the running-time more effectively.

Still, despite this problem Hugo (****) is visually arresting and well-directed, with some educational value regarding the early days of cinema and some excellent use of emotion without descending into mawkishness (one shudders to think what an off-form Spielberg would have made of this script). The film is available now in the UK (DVD, Blu-Ray) and USA (DVD, Blu-Ray) now.
Posted by Adam Whitehead at 11:00