A round-up of some recent news about Game of Thrones and the books it is based on. 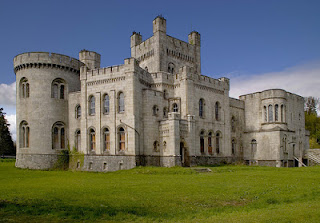 First up, HBO has found its Riverrun. With filming of Season 3 of the show now entering its second month, shooting is focusing on the ancestral castle of House Tully. Gosford Castle in County Armagh is standing in for the castle, apparently with both exteriors and interiors being filmed there. 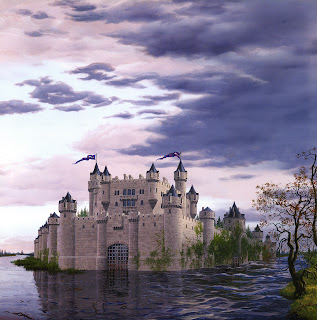 Looks like an excellent match for the castle from the books, though presumably the Red Fork and Tumblestone rivers will be added later with CGI.

George R.R. Martin has also conducted an in-depth interview with the Spanish ASoIaF website Asshai.com. Martin's interviews for several years have focused on the TV series and very general questions, so it's good to see a plot and character-focused exchange like this one. Note that there will be spoilers for those who have not yet read A Dance with Dragons. In a separate interview Martin has also stated that he now has 200 completed and semi-finalised manuscript pages for The Winds of Winter, as well as a further 200 pages in draft form. This means that roughly a quarter of The Winds of Winter exists in at least an initial form, but given how the writing went on A Dance with Dragons it is not really possible to extrapolate a potential release date from this info.

The next A Song of Ice and Fire-related releases will be Inside HBO's Game of Thrones by Bryan Cogman (25 September), an insider's guide to the TV series, and The Lands of Ice and Fire by Jonathan Roberts (30 October), the first-ever canon collection of maps of the world of Westeros and Essos, approved by GRRM.
Posted by Adam Whitehead at 13:14

Email ThisBlogThis!Share to TwitterShare to FacebookShare to Pinterest
Labels: a dance with dragons, a game of thrones (TV series), a song of ice and fire, bryan cogman, george r.r. martin, hbo, interviews, the winds of winter

Actually, it is possible to extrapolate a release date. It's just that doing so produces a date folks don't like to think about.

I'll be shocked if Winds of Winter is out before 2016.

Agreed. I've been thinking Christmas 2015, but Spring 2016 is certainly possible. That's still faster than ADWD, but not by a vast amount.

Possibly pessimistic, but I'd rather be pessimistic and pleasantly surprised than vice versa :-)

I would be happy if it came out any time before 2020. My expectations are in shatters. Just let this one thing be true!

400 is shocking. I think over a year ago when GRRM finished ADWD he already had 400 pages of Winds. But with all the promo and travelling its no wonder...

Well, that does mean he'll take another six years from now to finish it if he maintains that speed :-O But by GRRM's own admission, this year has been extremely busy. With more time to work on it, the book should come faster.

Or maybe not. We may be better off reading tea leaves :-)

As long as he's able to finish the series, and the final two books 'match' (same cover design / style etc.) as the newest editions, and Dance With Dragons, I'm happy. I'm a big big fan of consistency. And what's that? The novel itself is what matters? I know the last two WILL be amazing.

Har! I just wish GRRM start focusing more on writing and less on promoting that tv show... Otherwise the "winds of winter" TV-season will be finished before the book!

I hope the HBO season 3 show is better than season 2. Season 2 was a BIG dissapointment since they skipped so many key chapters (berrick dundarian????) and did away with jane westerling completely for some fake character from volantis of all places. BTW the battle of the black water was cheaply done and sucked.....

I would like to read the end of the series before I die. I will be 59 in December.

GRRM isn't getting any younger either. It would be horrible if he died before the books were finished.

@Drogun, I completely agree about season 2. The blackwater episode came off as cheesy to me. However, ACoK wasn't one of my favs, and the next 2 seasons have a lot more potential. A storm of swords is my favorite book of all time.

Season 2 was a huge let down. They left out a lot of important facts and attempted to mix books 2 and 3 together. While for the uninitiated this may have been advantageous, it surely pissed me off! Here's hoping for a better season 3 and a swift book 6. I can't wait 'til 2016 for this book. I need more ASoIaF in my life. I can only re-read the books so many times before I go insane