Game of Thrones: The RPG

Mors Westford is a former knight in the service of House Lannister. For refusing to take part in the mission to kill Princess Elia Martell and her children during the Sack of King's Landing, Mors was declared a traitor. He escaped punishment by taking the black and now serves on the Wall as one of the Night's Watch's finest trackers and soldiers. When wildlings cross the Wall and hole up in the abandoned castle of Icemark, it falls to Mors to flush them out. After this mission Mors encounters a young woman on the run and discovers a labyrinth conspiracy originating in King's Landing. 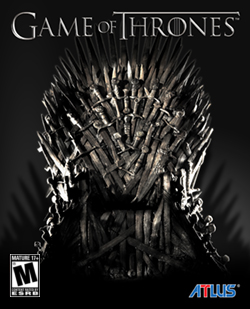 Meanwhile, Ser Alester Sarwyck returns home to his castle of Riverspring (near the source of the Blackwater Rush) upon learning of the death of his father. Riverspring is in danger of falling into the hands of Alester's brutal bastard half-brother, Valarr, so Alester travels to King's Landing to win the support of Queen Cersei in his attempts to succeed his father. He also discovers evidence of a conspiracy involving a young woman on the run to the Wall, and begins his own investigations. Ultimately, his and Mors's paths will cross, and they will have to join forces to defeat the conspirators even as Westeros descends into the chaos of the War of the Five Kings all around them.

It would be fair to say that Cyanide's first crack at the Song of Ice and Fire computer game license, Game of Thrones: Genesis, was not a notable success. An exceptionally poor strategy game that failed to capture the flavour of the novels, it was unsurprisingly critically pounded. Expectations for their second game based on the franchise, a roleplaying game, were accordingly lowered.

For its first third or so, Game of Thrones: The Roleplaying Game meets these low expectations. Graphically, the game is serviceable but disappointing. Talk of it looking like a previous-generation game is somewhat hyperbolic, and there's some nice design work in the game, but ultimately it does look about five years old. Cyanide had limited resources to use to work on the game, and graphically some shortcuts had to be taken.

In terms of structure, the game is more successful. Game chapters alternate between Mors and Alester, with each chapter usually ending on a cliffhanger before switching characters. In this manner the game reproduces the structure of the novels. It's a nice conceit which actually works quite well. The game also initially unfolds in two different timelines, with Alester playing catch-up with days and weeks passing during his adventure whilst Mors's story unfolds in real time. This results in a countdown until the two storylines meet and synch up, which also gives the game a feeling of progress.

Control-wise the game is a mixed bag. The game is overwhelmingly focused on combat to the exclusion of almost any other game mechanics. All of your skills relate to combat (none of your skills affect dialogue choices, for example) and the game throws you into battle extremely frequently. Combat is undertaken almost entirely through status-altering attacks and managing your health and energy (special attacks cost energy, and working out when to use a special attack and when to conserve energy is vital). However, once you gain access to certain skills, most notably knockdown attacks, combat becomes almost perfunctorily easy (a couple of late-game boss fights aside). It isn't the worst combat system ever (it's a huge improvement over the likes of say, The Witcher's) but it falls short of its potential.

The game otherwise unfolds in the traditional modern CRPG formula, with you having a main questline to pursue as well as side-quests. Whilst still favouring combat as your main way of progress, some of these quests can be resolved through dialogue instead, which mixes things up nicely. Unfortunately, the writing and dialogue tends towards the banal, making following these side-quests somewhat tedious in places.

After a first half that can charitably be called 'variable' in quality, however, the game unexpectedly takes a turn towards the impressive. The plot twists and turns through a series of brutal, murderous twists that equal anything in the novels and the storyline accelerates into high gear, moving from an action-based storyline of conspiracies and intrigue to more of a gut-wrenching tragedy. The finale is surprisingly affecting, and definitely one of the best endings to a CRPG in recent years.

Game of Thrones: The Roleplaying Game (***½) is a long, slow burn which takes an apparent age to really get going. Indifferent graphics, dodgy writing (for the most part) and only a semi-successful combat system threaten to sink the game altogether before the writers spring a series of impressive surprises on the player that takes the story in an altogether unexpected direction. Ultimately, however, the impressive ending justifies all that went before it, making the game worthwhile and enjoyable. The game is available now in the UK (PC, X-Box 360, PlayStation 3) and the USA (PC, X-Box 360, PlayStation 3), as well as from Steam.
Posted by Adam Whitehead at 00:04

Email ThisBlogThis!Share to TwitterShare to FacebookShare to Pinterest
Labels: a game of thrones (TV series), a song of ice and fire, cyanide, game of thrones: the rpg, george r.r. martin, hbo