An alien artifact has opened a wormhole nexus leading to a thousand different star systems, all of them containing at least one Earth-like world. A mass exodus, the greatest diaspora in human history, is threatening to take place but one group of Belter settlers have already staked a claim to a world they call Ilus, although the corporation granted UN settlement rights prefers to call it New Terra. As the settlers and corporate representatives resort to violence, it falls to Jim Holden and the crew of the Rocinante to mediate their dispute. This proves to be a lot easier said than done. 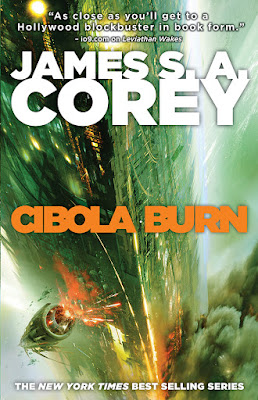 Cibola Burn is the fourth novel in The Expanse series by Daniel Abraham and Ty Franck (writing as James S.A. Corey) and the first to take place outside the Solar system. The Expanse's big success in its opening novels was that it created a relatively restrained vision of the future, with humanity forced to employ slower-than-light travel between the worlds of the Solar system. After the events of Abaddon's Gate, the way to the stars has been thrown open, but it still takes months to get anywhere. For the colonists on Ilus and later the Rocinante crew, this puts them well out of the range of immediate help when things go disastrously wrong.

Each of the Expanse novels has taken a somewhat different tone, helped by Holden being the only continuing POV character, with the rest being exclusive to each novel. Cibola Burn feels like a Western (and more Deadwood than Gunsmoke), with the unruly settlers on the frontier being reeled back in by the mining company backed up by a reluctant sherrif with Indians and smallpox on the horizon. There's lots of hard moral questions and tough challenges posed by both the situation and the environment. This shift of tone is welcome and well-played as it allows a tighter focus on real, low-tech issues and solutions like the first (and still the best) novel in the series, Leviathan Wakes. The threat of the protomolecule, its creators and its even more enigmatic enemies does reassert itself towards the end of the book, along with a space-borne problem that feels a little too reminiscent of Abaddon's Gate, but it definitely takes a back seat for the most of the book.

The focus is on three new characters: a Belter settler named Basia, who is reluctantly drawn into becoming a terrorist; a security officer called Havelock on the orbiting corporation ship and a scientist named Elvi who just wants to be left alone so she can get on with cataloguing the planet's crazy flora and fauna.  These are all well-crafted characters, if not particularly original. Havelock, as the company man who suddenly realises his corporate masters are useless, is an archetype that is looking dangerously overused at this point in the series. Other characters are less well-defined, and main villain Murtry is as cliched and uninteresting as they come: a rigid, dogmatic man unable to adapt to changing circumstances unless it involves shooting things. I get the impression that Abraham and Frank wanted to create a morally murky situation with sympathetic POVs on both sides, but Murtry's outright villainy soon means that the corporate side loses all sympathy and interest.

For a novel almost 600 pages long (in hardcover!) the pages fly past briskly and there's an interesting move away from the gunfights and set piece explosions of the previous novels. There's still a zero-G battle or three, but the writers dial back the more obvious shooting in favour of evoking the occasional SF sensawunda that represents the genre at its best. The social commentary on us bringing our baggage to the stars is well-handled, if a little obvious, and events run enjoyably up to a climax that hints at bigger things to come.

Cibola Burn (****) is the best book in the series since Leviathan Wakes, restoring focus and verve to a series that felt like it was becoming predictable. It'll be interesting to see how they adapt this book to the screen in later seasons of The Expanse, however. Although the producers will likely enjoy the far smaller scale (and hence budget) of things, I can't see viewers being too interested in taking a season off from the rest of the Solar system to see Holden and his crew dealing with frontier settler problems. But as a novel, it workers very well. The book is available now in the UK and USA.
Posted by Adam Whitehead at 18:35

You're reviewing Book 4 when Book 6 is about to be released? How big is your stack of unread books? - Ian