Black Library have confirmed that they will be publishing a new Paul Kearney novel set in the Warhammer 40,000 universe in 2017. 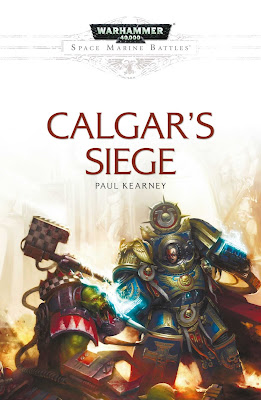 Kearney's first novel for Black Libray, Dark Hunters: Umbra Sumus, was put on indefinite hold due to a copyright issue over the title (which clashes with Sherrilyn Kenyon's extremely popular Dark-Hunter series of vampire novels). Black Library have apparently been trying to resolve the legal issue for a year, but it's unclear if the novel will see the light of day without at least a title change and potentially a partial rewrite.

The new book is called Calgar's Siege and is a stand-alone novel in the Space Marine Battles line:

Marneus Augustus Calgar, Chapter Master of the Ultramarines, must survive the siege of Zalathras if he is to defeat the greenskin hordes of Warlord Brug.

Marneus Augustus Calgar is the Lord of Ultramar, one of the greatest realms of the Imperium. As Chapter Master of the Ultramarines, he leads one of the most prestigious and powerful Space Marine Chapters devoted to the defence of Mankind. In him, the blood of the Primarch Guilliman runs still. When Calgar receives a summons to the world of Zalidar he is unaware, as are the world's inhabitants, that it is under attack by the Ork Warlord Brug. When his vessel is shot down, Calgar and his Honour Guard must trek across Zalidar's jungle through ork-held territory to reach the city of Zalathras. A terrible siege ensues against a vast greenskin horde. Only Calgar can hope to prevail against such odds in a brutal conflict that gives rise to a legend that will last for eternity...

Kearney's most recent novel is the completely different (and excellent) Wolf in the Attic for Solaris, which he hopes to write a sequel to if sales prove good.

Plot sounds a bit like "March Upcountry" by Johnny Ringo and Dave Webber though. (And, yes, I know they're both likely cribbing off Xenophon)

And Kearney's already done Xenophon with THE TEN THOUSAND, of course.

I'll read anything Kearney writes...hey, Wert, is there any reason to be optimistic about The Sea Beggars?