Where to Start with Star Trek?

The recent arrival of Star Trek: Picard on CBS All Access and Amazon Prime has spurred a renewed interest in the venerable SF franchise. New viewers want to check out the older material, but the sheer amount of it is daunting. By the summer of 2020, no less than 34 seasons of television will have aired in the franchise, totalling 777 episodes spread across eight separate series airing over fifty-four years (and counting). It would take you more than 570 hours (or almost 24 days, non-stop) to watch all of that material. In addition, there are 13 feature films in the mix, as well as a plethora of video games and hundreds of novels, audio dramas and fan films. If you want to check out this mass of material where do you start?

There are several different approaches you can take and I’ll run through a few of them below. The one thing I would say first is that, with a few notable exceptions, Star Trek is mostly an episodic franchise, where each episode stands alone with its own beginning, middle and end. That starts to shift in Deep Space Nine, which introduces more serialised elements, and by the time of Discovery and Picard the series has become fully serialised, but for the most part the different series are episodic and in fact designed for each episode to be enjoyed by themselves.

Before we get into the lists, it might be worthwhile briefly brushing up on what each series is about. 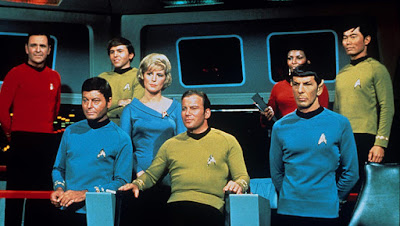 Also called the original series, the classic series or just Star Trek, this series follows the adventures of Starfleet Captain James T. Kirk and the crew of the Constitution-class starship USS Enterprise. They explore strange new worlds, encounter new alien life and seek to uphold the utopian values of the United Federation of Planets in the mid-23rd Century whilst dealing with recurring enemies, including the Klingons and Romulans. The story of this series continues in Star Trek: The Animated Series (which is the same, but as a cartoon) and then in the first six Star Trek feature films.

The first episode of the series, The Cage, was filmed two years before the rest of the series and features a significantly different cast of characters (who do go on to play major roles in some of the films and in Star Trek: Discovery, which revisits the same time period). 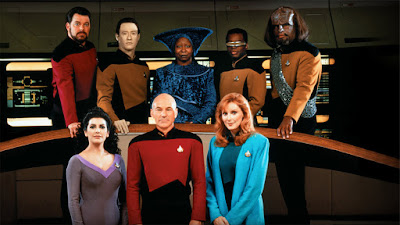 Set in the mid-24th Century, roughly 100 years after the events of the original series, The Next Generation focuses on a brand-new, much larger and vastly more sophisticated Galaxy-class USS Enterprise under the command of Captain Jean-Luc Picard. The emphasis remains on exploring new worlds and meeting new races. Although the series mostly remains episodic, recurring and more serialised elements creep in towards its end. Most notable is the introduction of the Borg, an overwhelmingly powerful cybernetic threat which remains a key enemy through the next several series, and the Cardassians, a mid-ranking antagonistic enemy. The story of this series continues in the seventh through tenth Star Trek feature films and the sequel-series Star Trek: Picard, set thirty years later. 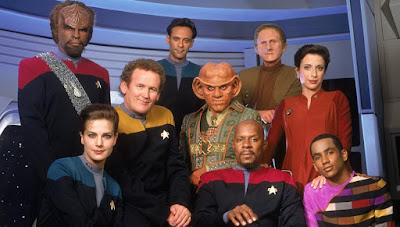 To date, the only Star Trek series not set on a starship. Instead, the focus is on Deep Space Nine, a Federation outpost established on an abandoned Cardassian space station orbiting the planet Bajor. The Cardassians conquered and ruled Bajor with an iron fist for forty years before withdrawing, leaving the planet in ruins. The Federation are helping them rebuild, their efforts spearheaded by Commander Benjamin Sisko. Unlike most Star Trek series, which focuses on the Federation and Starfleet crewmembers, this series has a large number of civilian and alien recurring characters. Bajor becomes unexpectedly important when a stable wormhole leading to the remote Gamma Quadrant of the galaxy is discovered, allowing the planet to benefit from increased trade (to the fury of the Cardassians). Early seasons revolve around renewed Cardassian/Bajoran tensions before the introduction of the Dominion, the alien alliance which rules the Gamma Quadrant and is unhappy with the Federation poking around its back yard. Later seasons are more heavily serialised and see the outbreak of full-scale war between the Federation and the Dominion.

Deep Space Nine was controversial during its first airing for being perceived as a lot darker than prior Star Trek shows, but in recent years it has undergone a critical reassessment and is now often cited as the best (or at least the most critically consistent) of the Star Trek series. 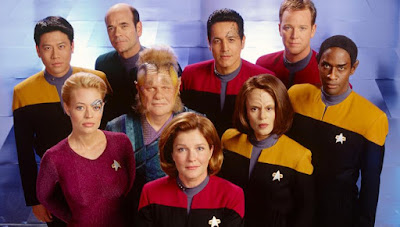 This series opens when the USS Voyager is flung 75,000 light-years across the galaxy to the Delta Quadrant and has to return home, which is estimated will take over seventy years at maximum warp. Captain Kathryn Janeway and her crew seek to find faster ways home with any means at their disposal, whilst upholding Federation values in a desperate corner of space where no one even knows who the Federation are. 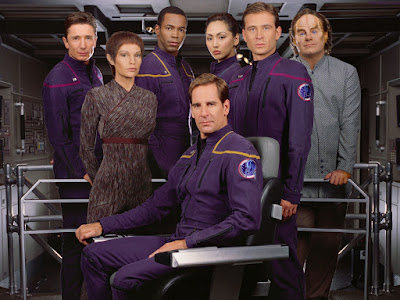 A prequel series taking place about a century before the events of The Original Series, this show takes place before the Federation or Starfleet even exist. Instead, it follows the adventures of the NX-01 Enterprise, Earth’s first experimental spacecraft with a Warp 5 drive. The series sees the crew trying to engage in interstellar diplomacy, exploration and commerce with much more primitive technology than even in Kirk’s time, whilst also trying to deal with problems such as a brewing conflict between the Andorians and Vulcans, and Earth’s first fumbling dealings with the Klingons and Romulans. The series is almost completely episodic for its first two years, but in its third season explores a series-long arc where Enterprise has to search for aliens who carried out a devastating sneak attack on Earth. The final season is divided into shorter arcs revolving around the formation of the Federation.

A series of three films (Star Trek, Into Darkness, Beyond) produced by J.J. Abrams, these films are set in an alternate timeline created by time travel. Spock (from the original series) is blasted back in time by his failure to stop the destruction of the Romulan homeworld, pursued by a vengeful Romulan crew. This results in alterations to the timeline, such as a younger James T. Kirk and his fellow crewmembers joining forces and taking command of the Enterprise years earlier than in the original timeline and getting into fresh, new adventures in the mid-23rd Century. 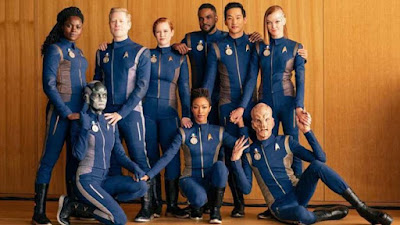 Another prequel series, this time taking place ten years before the events of The Original Series. The focus is on Michael Burnham, the first officer of the USS Shenzhou who badly fumbles a confrontation with the Klingons, inadvertently leading to a massive war. A disgraced Burnham is assigned to the USS Discovery, a highly experimental starship with unusual technology and an oddball, maverick captain, where she is offered the chance to atone for her mistakes. 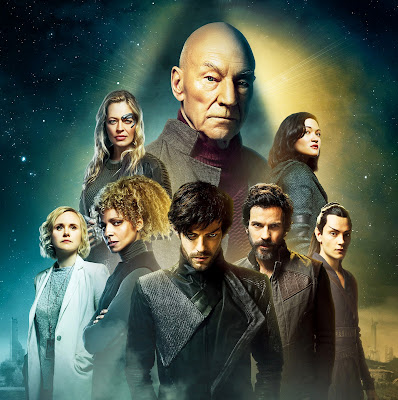 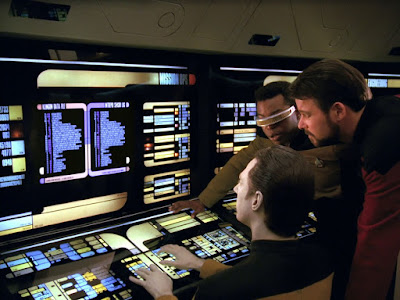 This order is not exhaustive but what it does is provide a snapshot of the different series and some of the strongest stand-alone episodes which hold up well today. These episodes are stand-alones (not part of multi-episodic arcs) and are designed to showcase some of the different types of storytelling the series indulges in. A viewer can jump from these episodes into the rest of that series if they like what they see.

The Animated Series is effectively a continuation of The Original Series and it would be hard to recommend individual episodes from Enterprise, Discovery or Picard due to their heavy serialisation (Picard is also best-watched having seen some or all of The Next Generation first).

* This may seem to be an exception to the multi-episode arc rule, as In the Pale Moonlight has references to and a big impact on the Dominion War storyline which dominates much of Deep Space Nine’s latter seasons. However, the episode itself is more about Sisko’s journey and how he and Garak bring about a major shift in political events whilst never leaving the station (the Dominion itself does not appear), which can be understood well enough without additional context. 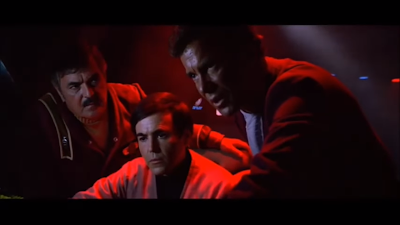 This approach simply has the viewer sampling the first episode of each version of the series to see what grabs their attention straight away, and from there they can choose which series to watch first: 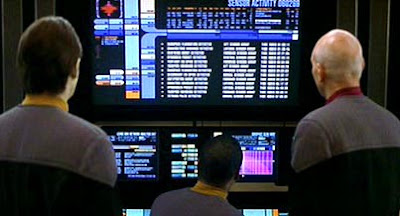 AKA the “completionist” approach. This may be the approach everyone ends up taking once they’ve been sucked into the material, but I wouldn’t recommend it for a first run-through. This approach basically means watching the series in order of release and is the best for enjoying the series as it originally aired and was intended (just somewhat compressed).

The primary weakness of this approach is having to watch The Original Series in full before the more recent shows. The original show is certainly great from the perspective of a 1960s TV series and also has many outstanding episodes that have withstood the test of time, but it also has a lot of episodes that…have not. The series underwent an in-depth HD remastering process in 2006 which saw the film quality improved and revamped CG effects added to make the visual quality of the episodes more acceptable to modern audiences, although obviously the writing and performances were not affected.

You can tweak this order for simplicity: there’s nothing stopping you from watching all six films featuring the original cast before watching The Next Generation, and Deep Space Nine and Voyager are divorced from one another almost completely, so you could watch DS9 in full before switching to Voyager. TNG and DS9 do have a few more notable crossovers in terms of characters and storylines, but it also wouldn’t be the end of the world if you finished watching TNG in full before watching DS9. 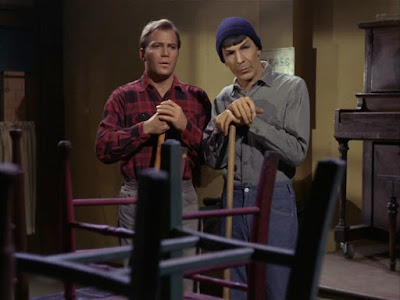 This order has some strengths, as it roughly matches the historical order of events, but it also has some major weaknesses. It puts Enterprise, arguably the weakest Trek series overall, up first and also features a number of spoilers for later series (since the Enterprise writers couldn’t resist pulling in familiar creatures and aliens to the show from later periods, no matter how incongruous). You’re also talking about waiting a long time to get to the good stuff.

* The chronological order of events also makes placing the Kelvin timeline movies awkward, as they rely heavily on knowledge of events after the original show and The Next Generation but are set much earlier, albeit in a parallel universe. Sticking them here is probably the best approach.

What's the best order then? I'd say order of release for those who want to experience the franchise as it was released and understand it could be a bit of a bumpy ride, otherwise one of the curated approaches might be best.

Thank you for reading The Wertzone. To help me provide better content, please consider contributing to my Patreon page and other funding methods.
Posted by Adam Whitehead at 16:49

Not my work, but for the most perfectionistic of completionists, this page lists all episodes by air date (up to the first reboot movie), which is particularly useful if you want to watch the interleaved seasons of TNG/DS9/Voyager as they aired. Movies are also included, by release date.