Doctor Strange in the Multiverse of Madness

Doctor Stephen Strange has helped save the universe from Thanos, but finds his life at home unsatisfying. He has renounced the title of Sorcerer Supreme in favour of Wong to focus on research. The arrival of a young woman, America Chavez, who can travel between dimensions at will, sees Doctor Strange seek the help of Wanda Maximoff, only to discover that she is now the Scarlet Witch, a magical being of incredible power, who wants America's power to be reunited with her children. Horrified, Doctor Strange must take part in a desperate battle to save America and, if possible, Wanda from her new alter-ego. 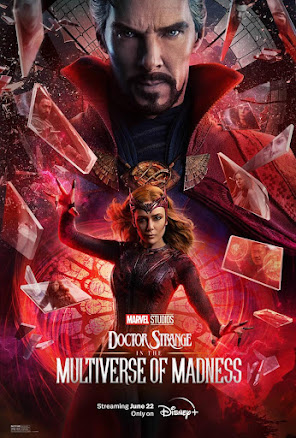 Way back when, the powers that be very nearly let Edgar Wright direct Ant-Man but then bottled it, apparently scared that Wright's idiosyncratic, highly-identifiable style would be out of keeping with the Marvel Cinematic Universe's fairly pedestrian directing paradigm. Since then, the Marvel movies have kept to a fairly solid "house style" that allows moments of flair or entertainment, but little in the way of identifiable soul.
Until they hired Sam Raimi, that is. The horror auteur behind the Evil Dead trilogy (and its spin-off television series), numerous one-off hits, the Hercules and Xena TV shows and the OG Spider-Man trilogy, Raimi is known for his terrific visual flair and alternating moments of gross-out horror and laugh-out-loud comedy (sometimes in the same scene). And it's abundantly clear here that absolutely nobody was going to put training wheels on Sam Raimi. The 62-year-old director very clearly had an absolute blast making this film, with a riotous energy that harks right back to his forty-year-old horror classic, The Evil Dead.
Marvel do manage to keep the film within the MCU mythos, with writer Michael Waldron doing his best to tie elements from the original Doctor Strange with the Infinity War/Endgame duology with the recent Disney+ show WandaVision, which was still shooting when work on Doctor Strange 2 began. He also wrote and produced Loki, another show which helped introduce the concept of the Multiverse into the Marvel Cinematic Universe. And of course he also has to keep the film comprehensible to the casual audience who like seeing Benedict Cumberbatch magic bad guys into oblivion but don't want to keep the MCU Wiki on standby on their phone to look up obscure lore every few minutes.
This combination of Waldron's continuity-heavy script and Raimi's deranged directorial style, somehow, works well. The heavy-hitting cast do excellent work, with Cumberbatch as accomplished as ever as Strange and returning hands Chiwetel Ejiofor, Benedict Wong and Rachel McAdams all bringing their A-game. Newcomer Xochitl Gomez also gives an infectiously enjoyable performance as America Chavez, despite getting lost in the mix in the latter part of the movie.
The visuals are impressive and in fact work on two levels. The film employs imaginative and impressive CGI (the goofy-but-lethal monster Gargantos is entertaining) but Raimi also sees nothing wrong with grabbing a handheld and hiding behind the bannisters like he's a 20-year-old kid making a movie in a cabin in the woods with his friends. The sheer number of shout-outs to the Evil Dead trilogy borders on silly at times (with zombie versions of the main characters, the signature "dead rising" hand move and the traditionally welcome Bruce Campbell cameo), but the visual style elevates Multiverse of Madness into the upper tier of Marvel movies.
The horror scenes might be a turnoff to younger viewers, though, and I wasn't quite prepared for how dark and grim the film was prepared to go with some concepts and ideas. The film usually peppers comic interludes through the story to lighten the mood, but I'm not sure how much help that will be with very young kids. Some parental advisory is warranted here for those who'd normally let their kids watch the latest Marvel project without any qualms at all.
I can see how the film's crazy and unique directorial tone may have put off some who'd gotten used to the MCU's predictability, but it's to the franchise's credit that even twenty-eight films into the series (putting it ahead of James Bond even including the non-canon films) that they're willing to take a risk here that pays off. Indeed, the film's main weakness is maybe also Raimi's traditional one, namely a messy ending which indicates he wasn't quite sure where to leave things (complete with requisite multi-end-credits sequences to tee up future films, of course).
Otherwise Doctor Strange in the Multiverse of Madness (****½) is a never-boring, always-entertaining head-trip through comedy, horror and gonzoid SF weirdness, and a shot in the arm to an MCU that, on film anyway, feels like it's been drifting for a few instalments. The movie is available to watch worldwide now on Disney+.
Thank you for reading The Wertzone. To help me provide better content, please consider contributing to my Patreon page and other funding methods.
Posted by Adam Whitehead at 15:47

Email ThisBlogThis!Share to TwitterShare to FacebookShare to Pinterest
Labels: disney, disney+, doctor strange in the multiverse of madness, marvel

I enjoyed the movie, but was disappointed with Elizabeth Olsen getting a storyline that felt like a rehash of WandaVision.

I thought it was great, but the two different portrayals of multiversal doppelgangers (SM:NWH and DS:MOM) bugs me. Unless there was an explanation that flew too far under the radar for me to catch, it seems less like a feature and more like a bug.

True that. I felt the same. This is the same subject taken up in Wanda vision.... Seems for the sake of it, they have made her the villain once again...

I thought this movie had a bloated plot, was too deep into trainspotting, required people to be Marvel completionists for financial gain (ie please subscribe to Disney plus or you won't really get this properly), and was just a bit too grotesque at times. It's a movie that I have no desire to see again, and would gladly take back the hours and dollars I spent on it. But then - there have to be some dissenting reviews in the world don't there.