The Amazing Maurice and His Educated Rodents by Terry Pratchett

A band of travellers from Ankh-Morpork have arrived in the town of Bad Blintz. The band consists of a boy with a flute named Keith, a tomcat called Maurice and a lot of rats. A lot of very smart rats. However, as the town suffers from a curiously well-timed rat infestation and Keith and Maurice prepare to enact 'the scam', it becomes clear that something else is at work in the sewers and tunnels under the town. Something that takes an interest in the curiously smart rodents... 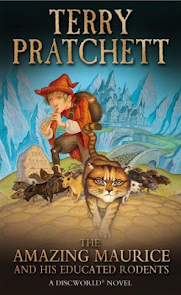 Discworld occupies such a huge part of Sir Terry Pratchett's output that it's sometimes easy to forget his other career, that of a bestselling children's author. Thanks to the animated TV show, Pratchett was as well-known for his Truckers trilogy of children's fantasy as he was his adult Discworld series for a while, and his other books aimed at children were also huge successes. His Johnny Maxwell trilogy was the first of his works adapted for live-action television.

It's therefore interesting that it took twenty-eight novels for Pratchett to write a Discworld book for children, and it's also quite remarkable the impact it had on his career. The Amazing Maurice and His Educated Rodents was published in 2001 and won the Carnegie Medal for children's fiction. Although a British award, it seems to have had a strong impact in the American market, with Maurice being the book that apparently finally broke through and established Pratchett as a solid-seller in the US after years of very patchy performances for the earlier books. Pratchett's performance in the UK also seemed to pick up, and indeed his already-incredible sales performance in the UK (1% of all books sold in Britain in the 1990s were apparently Pratchetts, which was remarkable at the time) would have likely broken even more records had he not also been overtaken around the same time by a certain other fantasy series about wizards and magic. Pratchett no doubt cried about this into his handkerchiefs made of £100 bills.

The Amazing Maurice is an an interesting novel, most notably because Pratchett makes almost exactly zero concessions to his apparently intended audience (his other books are not exactly awash in nudity and swearing). The novel is written in the same manner as his adult books and in fact is actually among the most disturbing Discworld novels, with the revelation of the antagonist in the book being one of Pratchett's more revolting moments. It may have talking rats in it, but the tone is closer to Watership Down (complete with some pretty savage fights and deaths) than to Beatrix Potter. Pratchett seems to do this deliberately, with the rats' belief in a utopian future of animal cooperation stemming from reading a children's book called Mr. Bunnsy Has An Adventure, which becomes a totem of their tribe. Pratchett paints the internal divisions of the rat gang and each character in some detail, with his traditional economical-but-effective storytelling. The book has a darker tone than most of his novels, and whilst there are still a few laughs here, it's a more intense book than many of the Discworld series.

The novel also has some great riffs on folklore, on the allure of storytelling and the inhumanity of humans to both other humans and the natural world. Pratchett is at his best when he's angry about some injustice, and he fires up his anger quite nicely here, particularly on how people treat animals.

It's also quite snappy, coming in at a breezy 270 pages, avoiding the bloat some of the later Discworld books intermittently suffered from. Pratchett sets up his plot and characters, tell his story with impressive depth and characterisation and gets out all in the time that some more traditional fantasy authors are still using to clear their throats and get the protagonist out of his starting village.
There aren't many negatives aside from one, which was outside the author's power: at the time of his grossly premature passing in 2015, Pratchett had a sequel to this novel planned, in which the Amazing Maurice becomes a ship's cat. It's a grievous shame we'll never read that story. But the book is getting another chance to shine, with an animated film based on the novel scheduled for release in late 2022, starring Hugh Laurie, Emilia Clarke, David Tennant, Gemma Arterton, Himesh Patel, David Thewlis and Peter Serafinowicz.

The Amazing Maurice and His Educated Rodents (****½) is Pratchett at his most impressive, telling a darker story than normal but with his trademark wit and skills at character-building. It's also a complete stand-alone, with no connections at all to the rest of the Discworld series and can be read completely independently. It is available now in the UK and USA.
Note: An earlier version of this review appeared here.
Thank you for reading The Wertzone. To help me provide better content, please consider contributing to my Patreon page and other funding methods.
Posted by Adam Whitehead at 09:07

Email ThisBlogThis!Share to TwitterShare to FacebookShare to Pinterest
Labels: discworld, terry pratchett, the amazing maurice and his educated rodents