Lucasfilm have sneakily debuted the live-action appearance of a beloved Star Wars literary character. The second episode of Obi-Wan Kenobi sees the first appearance of Corran Horn as a young refugee boy, and he reprised that role in the fifth episode. In the old "Star Wars Expanded Universe" (now called "Legends) line of books, Horn was a hotshot X-wing pilot and Rogue Squadron member who became a powerful Jedi. 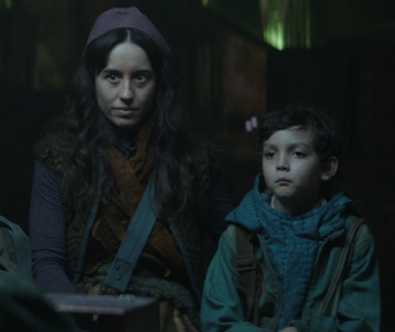 Corran Horn was created by Michael A. Stackpole for his X-Wing series of space opera novels. The novels were notable as the first Star Wars book series to focus on original characters, with Star Wars stalwarts like Luke and Leia reduced to cameo appearances. Corran was a hotshot pilot who joined the elite Rogue Squadron two years after the events of Return of the Jedi and rose to become one of its best pilots. He was instrumental in the New Republic's capture of Coruscant and its restoration as the Republic capital world. During these battles Horn was recognised as being Force-sensitive. Eventually he joined Luke Skywalker's New Jedi Academy on Yavin IV, rising to become a Jedi Knight and playing a key role in the war against the Yuuzhan Vong. Horn is notable as one of the few Legends-original characters who got an entire novel (I, Jedi) dedicated to him.

He was a very popular character, despite surface similarities to Luke (a hotshot pilot who becomes a Jedi Knight). He was generally more torn between his different outlooks and options than Luke ever was. In 2012 Disney bought Lucasfilm and the Star Wars IP and later ruled all the spin-off novels and comics non-canon, leading to the assumption that Horn would never be seen again.

In Obi-Wan Kenobi we meet Corran as a young boy on the planet Daiyu, a refugee from the Empire. A man named Haja Estree (Kumail Nanjiana) helps a sort-of underground railroad movement, helping would-be Force-sensitive people especially escape from the Inquisitors. We see Horn and his mother being helped in escaping the planet.. The role of Horn - listed in the credits just as "Corran" - is played by Indie Desroches. His mother, Nyche, is played by Marisé Alvarez. Nyche Horn was also the name of Corran's mother in the books. Horn and his mother briefly reappear on Jabiim in the fifth and latest episode of the series.

Stackpole noted the character's appearance on Twitter and confirmed he had been told about the appearance but he hadn't been consulted on it.

Fans have speculated whether Horn's appearance in Obi-Wan Kenobi is just an Easter Egg or might be setup work for Horn to appear in the upcoming Rogue Squadron movie.