Scott Lynch has provided another update on his long-percolating Gentleman Bastard series, confirming progress on both the fourth novel and a number of long-promised novellas. 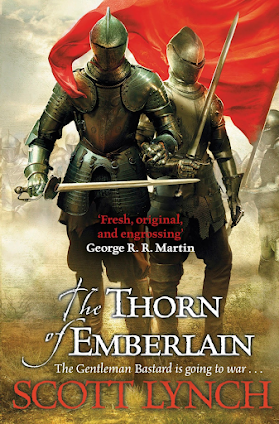 Lynch's series began with The Lies of Locke Lamora in 2006, a hugely successful debut fantasy novel that was marketed the first of seven books. It was immediately followed by Red Seas Under Red Skies in 2007. However, it was five years before the third book, The Republic of Thieves, finally hit shelves. Lynch confirmed in candid blog posts that he had been facing mental health issues which had delayed work on the series.
Lynch completed a draft of the fourth novel in the series, The Thorn of Emberlain, in 2019 (and shared a sneak peek at the map in 2016). However, additional health issues (presumably not helped by the pandemic) meant that progress on revisions proceeded very slowly. Lynch confirmed a year ago that he had switched to a new medication regime which seemed to be paying off, and was trying to speak more openly about his projects.
In today's update, Lynch confirmed that work on revising The Thorn of Emberlain continues and he hopes to have news on that front next month. In the meantime he has also completed the third of three Gentleman Bastard novellas which will serve as a nonessential bridge between The Republic of Thieves and The Thorn of Emberlain, the first exploring Locke and Jean's flight from the city of Karthain. The first novellas is as-yet untitled, but will be published by Subterranean Press before possibly seeing a wider release later on. The later novellas' titles have been known for a while, being The Mad Baron's Mechanical Attic and The Choir of Knives.
The Thorn of Emberlain is one of the most eagerly-awaited, long-gestating fantasy novels in the field, alongside George R.R. Martin's The Winds of Winter and Patrick Rothfuss's The Doors of Stone (both some eleven years in progress) and JV Jones's Endlords (twelve years). Both Martin and Jones have provided significant recent updates on making good progress, although the status of Rothfuss's novel remains unclear.
Posted by Adam Whitehead at 10:00

Email ThisBlogThis!Share to TwitterShare to FacebookShare to Pinterest
Labels: scott lynch, subterranean press, the gentleman bastard, the thorn of emberlain

I've been waiting for the fourth book for YEARS....are we totally, really sure about a September release?

No, it's not coming out in September. The book has never had an official release date.

Ignore the haters and impatient readers. I’m sure they are hard to ignore but I will wait for when you’re in the right space to finish it. You do you.