Ten years after the fall of the Old Republic, former Jedi Master Obi-Wan Kenobi lives in self-imposed exile on the desert planet Tatooine, keeping a watchful eye over the son of Anakin Skywalker. However, when Anakin's daughter is kidnapped from her home planet of Alderaan by mercenaries, Obi-Wan is reluctantly called back into action. The Emperor's Inquisitors are tracking down and destroying the last survivors of the Jedi Order, and some are obsessed with finding the last members of the Jedi Council...no matter the cost. 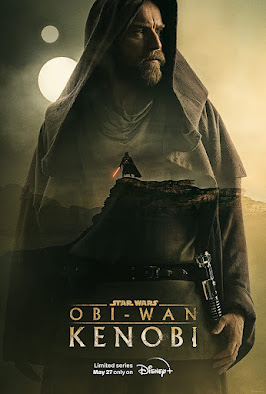 If there was an actor who was particularly ill-served by the Star Wars prequel trilogy, it was Ewan McGregor. One of Britain's hottest actors at the time, he was also a major Star Wars fan (partially due to his uncle Denis Lawson playing Wedge Antilles in the original trilogy) and leapt at the chance to appear in the films as the young Obi-Wan Kenobi. Unfortunately, his performance was hamstrung by some truly awful dialogue. It's a tribute to McGregor's acting skills that he was sometimes able to rise above the material with some great performances and moments (I'd argue he is the very thin line keeping Attack of the Clones on just about the right side of mostly bearable).

In view of this unfulfilled potential, McGregor and Lucasfilm have been working on ways of bringing him back to the galaxy far, far away for some years. A movie was in development at one point, but the underperformance of Solo seemed to shut down that idea. So now we have a six-part mini-series instead.

Obi-Wan Kenobi is certainly a stronger show than the inconsistent Book of Boba Fett but doesn't rise to the heights of The Mandalorian. McGregor is, once again, the best thing in it and he gives a stately, emotional performance filled with pain and regret for the horrors he has experienced. The script serves him much better than the prequel movies and it's genuinely fun to see the middle-aged Obi-Wan going on another adventure. Most of the supporting cast is great, and it's enjoyable to see Hayden Christensen reprise the role of Anakin/Darth Vader (even if the flashback scenes to the Clone Wars with a forty-year-old Christensen playing a teenager without much effort to de-age him are a bit odd). There's moments of satisfying fanservice along the way which will have long-term Star Wars grinning, from the minor (seeing Vader's personal Star Destroyer again) to the major (which would be major spoilers).

The show is inconsistent, though. Like a lot of other Disney+ shows (both Star Wars and Marvel), it feels like the low episode count is preventing it from being too ambitious, meaning a small and often claustrophobic scale which is not very Star Wars. On paper there's a lot to unpack here, with the politicking among the Inquisitors, Vader's hunt for Obi-Wan, the threat from new villain Third Sister Reva, an Imperial defector trying to make amends for the Empire's crimes, an underground railroad for Force-sensitives, Bail Organa walking a political tightrope, flashbacks to the day of Order 66 and the lives of the Skywalker family on Tatooine. However, the tight runtime prevents any of these ideas from really being explored in-depth. Instead we ping-pong between them as needed, meaning there's a lot of people doing a lot of things, but we are not necessarily given a good reason to invest in any of them.

It's a shame because we see some interesting new Star Wars planets for what feels like the first time in ages and there's a lot of ideas here that could be explored in an interesting manner if there was more time, but these ideas never have a chance to breathe.

There's also the curse of the larger canon surrounding the series: Obi-Wan Kenobi ties in to the video game Jedi: Fallen Order and the Clone Wars and Rebels TV shows, and walks a very awkward line between expanding on those entries to the mythos and keeping things accessible to the newcomer.

On the plus side, the lightsabre battles are very impressive, the musical score is great and the cast elevate the material. But there is the feeling that Obi-Wan Kenobi (***½) is relying too much on familiar ideas (another cute kid to protect!) and doesn't have enough time to flesh out its best ideas. The series is available now worldwide on Disney+.

Thank you for reading The Wertzone. To help me provide better content, please consider contributing to my Patreon page and other funding methods.
Posted by Adam Whitehead at 10:15