Cohen the Barbarian is one of the greatest heroes in the history of the Disc. He has defeated many enemies, found much treasure and conquered several empires. But his well-earned retirement of riches and power is a bit on the boring side, so he's now come up with a new idea: to return fire to the gods and confront them on their home ground of Dunmanifestin, atop the ten-mile spire of Cori Celesti at the very heart of the world. Unfortunately, this will destroy the Disc and everything on it. Fortunately, the wizards of Unseen University are ready to join forces with Leonardo da Quirm and the Ankh-Morpork City Watch to save the day. Or at least try to. 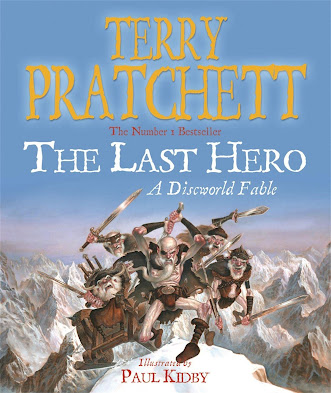 The Last Hero could be best-described as Discworld: Avengers. Pratchett takes advantage of the enormous cast of characters he's built up over twenty-six previous novels to come up with a story and cast of characters to form a team to save the world. Unfortunately, given the competence rating of the average Pratchettian protagonist is usually in minus figures (especially given the absence of Granny Weatherwax and Susan Sto Helit, and Commander Vimes only gets a cameo), this is not quite the slam-dunk solution it should be. Leonardo da Quirm, Captain Carrot and Rincewind join forces at the not-so-subtle behest of the Patrician and the Unseen University Faculty to stop Cohen's plan, and in the process have to build the Disc's first rocket ship and be the first people to set foot on the Disc's very small moon.

Compared to the form of thematic depth and rich characterisation Pratchett had hit in the mainline novels by this time, The Last Hero is lightweight and, even by Discworld standards, a bit implausible. The buildup and backstory of most Discworld novels is largely missing, and events unfold at very high speed given the epic scope of the story. But the book also works very well in its first aim, which is being a bit of disposable, knockabout fun of the kind we haven't seen since the early days of the series, and even better in its second, which is to act as a showcase for the artwork of Paul Kidby.

The original Discworld artist, Josh Kirby, passed away around the time this book was published. Kidby, who'd been working on art projects related to the setting for a few years already, had already been set up as his successor-in-waiting and this project was already underway at the time. Kidby would go on to illustrate the covers from Night Watch (the twenty-ninth book) onward, so The Last Hero can be read as a statement of confidence and intent here. And it works very well. Kirby's madcap art had a wit and charm of its own, but fans had long complained of a lack of fidelity to the text. Kirby's Rincewind was decades older than the thirtysomething character in the novels, and his constant depiction of Twoflower with literally four eyes rather than wearing glasses was quite odd. But Kidby's artwork is much truer to Pratchett's text and also much clearer and easier to parse, whilst still retaining its own, unique stylised energy.

The artwork throughout the book is excellent, often eliciting a giggle by itself. Many of the pieces in the book have become familiar art pieces for the setting individually, and these range from epic depictions of the view of the Disc and its supporting elephants and turtle from its moon to more intimate portraits of the characters and creatures. Kidby does a particularly great job at capturing Carrot's charismatic heroism and Rincewind's world-weary fatalism.

The story is thin and a little disposable, but fun. Pratchett layers in some melancholy thoughts about aging and feeling obsolete in your work as you get older, but also some traditional comic references to history and science.

The Last Hero (****) won't rank as many people's favourite Discworld book due to the lack of depth in its story, but the exceptional artwork elevates the work beyond being a mere curiosity or Christmas stocking-filler. The book is available now in the UK and USA.

Thank you for reading The Wertzone. To help me provide better content, please consider contributing to my Patreon page and other funding methods.
Posted by Adam Whitehead at 12:40

I've seen two different editions of this book. One of them has fewer illustrations.