The 24th Century. Powerful mega-corporations send under-resourced workers into orbit to break up old starships and recycle them. It's gruelling, dangerous work but Lynx Corporation is happy to provide workers with equipment and even clone bodies to download into if they die on the job...for a fee, of course. New workers start more than a billion dollars in debt and have to drive down the debt through hard, risky labour. However, there may be another way of dealing with Lynx's ruthless profiteering. 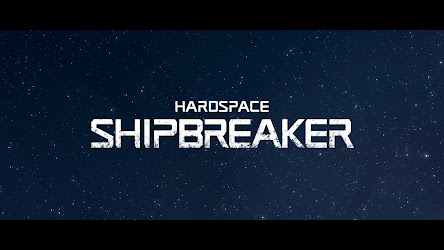 Hardspace: Shipbreaker is the latest game in the growing "disassembly" genre. For the last decade or so, there's been a boom in games that allow you to build things, like Minecraft and Fallout 4's settlement building mode. But we've also had games that give you the ability to dismantle things. Teardown is a good example of that and, on a different scale, so is Unpacking. This is the first game where you get to dismantle spaceships, which is inherently cool.

It also helps that the game is made by Blackbird Interactive, the same team (as Blackbird and earlier at Relic) who made the Homeworld series of video games, which have some of the most incredibly-designed spacecraft ever seen in gaming. That skill carries over into Hardspace, with the spacecraft looking like they've come straight from the covers of 1970s and 1980s SF novels with artwork by the likes of Chris Foss and Peter Elson. 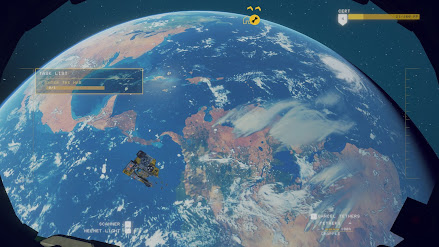 To start with, the ships you have to take apart are simple. They are unpowered and depressurised, so you can just pop the cockpit canopy or an airlock and start slicing them up quickly. Ship components and contents are divided into three categories: disposable items that get burned in the furnace, recyclable items that get sent into the processor and contents that can be used again as-is, which go in the collection barge. You have access to a gravity gun-like manipulation device which you can yeet things around with, and a laser cutter which you can use to cut connecting points or just slice things apart.

As the game continues you rapidly acquire more tools: tethers allow you to move large ship components that are too big for your manipulator, whilst demolition charges shatter ship hardpoints that your laser can't touch. However, ships get bigger and more complicated. A pressurised ship means you have to find a way of venting the atmosphere safely without destroying the contents (or yourself). A powered ship means safely removing the reactor without it going critical, and a ship with active fuel tanks means shutting down the flow of fuel through pipes (unless you want to blow the ship to smithereens with an ill-placed laser cut). Later ships may have still-active and dangerously-demented AI systems who do not appreciate being cut to pieces, or coolant systems that can freeze you solid if you are too cavalier with health and safety. 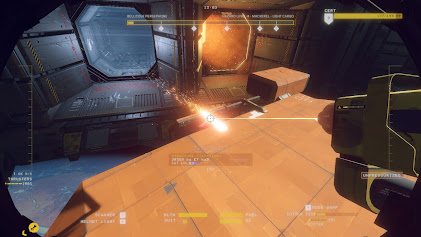 There are four ship classes, each with a huge number of modified variants, usually between cargo, passenger and research variants. Some ships are easy to start breaking apart from the outside in, like peeling a large metal banana that can travel at thousands of kilometres per second. Other ships are fiendish puzzle boxes that might explode if you set a foot wrong, requiring you to get into their depths and start carefully working your way outwards. 100%ing a ship with no losses is an amazing feeling, but the game is somewhat forgiving; blowing a ship apart accidentally is frustrating, but you can usually salvage enough debris to turn a profit.

On top of the simple act of demolishing ships, there's a strong storyline that permeates through the game in the form of video calls, emails and stern warnings from head office. The work you are doing is very dangerous and the company has complete call on your services. Fellow workers upset with this position have called for unionisation, alarming the company enough to send union-busters and new bosses to try to intimated people into staying in line. You have control over this storyline, since you can choose to join the union or keep your head down and keep working (you can even join the union and then sabotage it by refusing to join in strike action or keeping working properly instead of upsetting the union's plans). 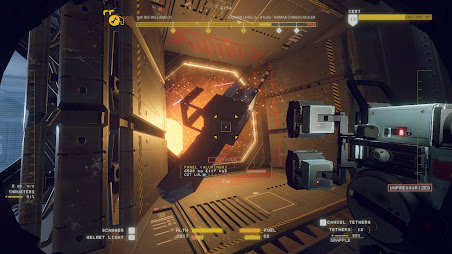 The narrative is not a huge amount of the game, turning up in odd voiceovers here and there, but it does feel timely with both the video game industry and many industries globally seeing a resurgence in labour rights debates and questions, with unions becoming a stronger force then they have been for some decades. It's unusual to see a game being so topical and raising questions worthy of debate.

But ultimately the game is about dismantling spaceships and it does that brilliantly. 3D movement in the vacuum of space, sending chunks of hull hurtling into the correct receptacle and correctly detonating a dozen charges in a way that breaks a ship apart just right are all satisfying. The UI is excellent, controls are responsive and solving a tricky puzzle in how to get a ship to break apart without exploding is immensely gratifying. 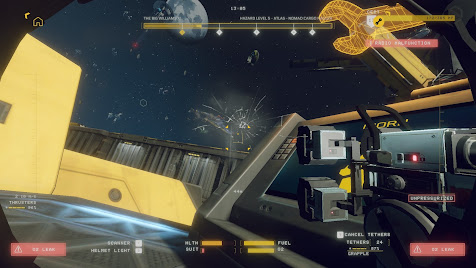 Problems do exist. Some controls feel like they could be spread out more: yeeting objects away from you with the gravity gun should be its own control rather than shared with breaking an object to ransack it for spare parts, as it's too easy to destroy an item you want to dispose of and too easy to dispose of an item you want to salvage. Tool modes can also change when you're not using them, meaning it's very easy to use the laser cutter's "wide beam" mode rather than its scalpel mode, sometimes with catastrophic results. Removing every last couch, computer terminal and light fitting from the larger ships can also start to feel like real work rather than fun, although clever cutters can come up with ingenious ways of dismantling ships around their furniture so it can be disposed of quickly and easily. The 15-minute shifts also feel a little restrictive after a while and some sort of overtime mode or upgrade extending them to 30 minutes could be a really good idea.

The problems are mostly minor and are overcome with experience. Hardspace: Shipbreaker (****½) is a superb game which has a great new idea and executes it extremely well. It is available now on PC and is coming to Xbox and PlayStation in the near future.

I've been having a ton of fun with this as well. It's a pretty unique experience.