The Hero of Ages by Brandon Sanderson

The great volcanoes are gradually covering the world in ash and the cloying mists are lasting longer with each passing day. Crops are failing, humanity is divided and the world is dying. Elend Venture, the emperor of humanity, and his Mistborn wife Vin are doing their best to repair the damage caused by events at the Well of Ascension, but their efforts seem in vain. An ancient destructive force has been unleashed upon the world, and many of their allies have been struck down. 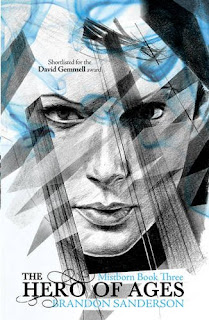 Sazed, last of the Terris Keepers, has lost his faith and now struggles to find a reason to live. The kandra TenSoon has been declared a traitor to his people and put on trial. The Steel Inquisitors and the monstrous koloss have found a new master and now prey on the weaker cities of humanity. As unthinkable as it sounds, it appears that removing the Lord Ruler may not have been the wisest of ideas...

The Hero of Ages opens with the world in a pretty apocalyptic state. Things are, as we are told in great detail, very bad indeed and our heroes' struggles to survive without becoming as brutal as the Lord Ruler are testing them to their limits. Sanderson successfully lays on the gloom and darkness throughout the book, creating an oppressive, backs-against-the-wall atmosphere that frequently has the reader scratching their heads and wondering how their heroes are going to get out this mess. The answer comes in a lengthy series of revelations (sometimes skirting perilously close to info-dumps, but Sanderson manages to just about avoid that pitfall) that are stunning, impressive and extremely logical given what has come before. 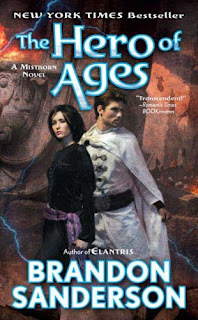 The characters continue to develop nicely, with some characters who were only in supporting roles in earlier books coming to the fore here, particularly Marsh and Spook. As with the previous book, there is definitely a lessening of the focus on Vin, who becomes just one more member (albeit frequently the most important) of the ensemble cast here rather than the out-and-out heroine. Oddly, this is actually works very well, since Vin's character has been explored and developed in the previous two volumes to the point where there isn't much more to be done with her.

The gloom that fills the book occasionally threatens to make events too bleak, with the wit and humour of the previous books reduced somewhat, but the pace is definitely turned up a notch from the second book and at around the three-quarters mark events explode into motion, carrying us through the hugely ambitious finale. Epic fantasies often collapse during their finale chapters and if Mistborn falters (some events in the Kandra Homeland during the final few chapters don't seem to make much sense given events at the start of the book), it is to a considerably less-pronounced degree than others. The ending is consistent with what has come before, features some excellent twists on the established characters and magic systems, and leaves clear hints of there being more to come, as well as clues for those readers interested in the greater cosmology and universe which Mistborn shares with Elantris, Warbreaker and the forthcoming Stormlight Archive series.

The Hero of Ages (****½) is a ferocious and satisfying conclusion to the Mistborn Trilogy, confirming Sanderson's status as one of the most promising writers to emerge in the field recently. The book is available now in the USA and will be published by Gollancz on 11 February 2010 in the UK.
Posted by Adam Whitehead at 00:12

Email ThisBlogThis!Share to TwitterShare to FacebookShare to Pinterest
Labels: brandon sanderson, mistborn, the hero of ages

Sounds like a great finale. One for me to look forward to.