Young Prince Teppic is sent forth by his father, the ruler of the desert kingdom of Djelibeybi, who sends him to Ankh-Morpork to join the Assassin's Guild. Teppic is successful in his studies there, but, seven years later, the death of his father sees him recalled to take up the mantle of pharoah. 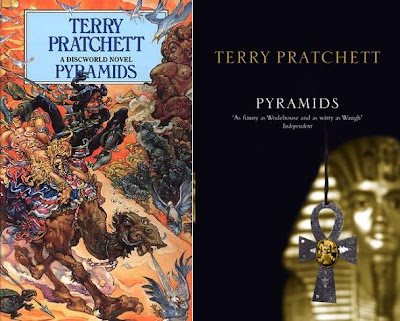 Unfortunately for all concerned, Teppic comes home with some strange notions about plumbing and the benefits of feather mattresses, which is not good news to the head priest, Dios, who prides himself on how things are run in the kingdom precisely as they were seven thousand years ago. New ideas are not welcome in the Old Kingdom...

Pyramids (subtitled 'The Book of Going Forth'), the seventh Discworld book, is one of several 'sleeper' hits in the series. Much more attention is lavished on the book preceding it, Wyrd Sisters, for introducing the popular characters of the Witches, whilst the succeeding volume, Guards! Guards!, gets a lot of props for introducing the City Watch and also for being one of the best books in the series. Pyramids by contrast tends to slip beneath the radar, which is a shame as it is a very good book indeed.

It's a stand-alone with not too many continuing story elements, but it works well for that. Rather than simply doing a story about someone with new, radical ideas turning up that the priesthood gets annoyed by, Pratchett throws in some excellent mickey-taking of philosophers and also some nice commentary about SF. Around the time Pyramids came out a lot of 'approachable' SF had been discarded in favour of brain-expanding stories about time travel and non-linear space or something, and Pratchett's constant use of "It's probably quantum!" to explain every single possible plot hole in the novel is a nice bit of satire. 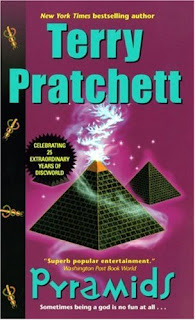 Teppic makes for an engaging protagonist, although he's one of Pratchett's more familiar archetypes (a general do-gooder whose attempts to do good go wrong but he sorts it all out in the end). Dios is one of the series' more interesting protagonists, and the various pyramid-builders and embalmers make for an amusing secondary cast as well. On the minus side, the book's humour is a little bit too obvious in places (there's a few obvious Cleopatra jokes and the employment of mummies for comedic purposes), but there's still a few good belly-laughs in there as well. The theme of the book also seems a bit vague, except that ossification should be avoided by embracing new ideas, which is a bit of a no-brainer.

Pyramids (****) is a solid entry to the Discworld series, funny and entertaining throughout. The book is available now in the UK and USA.
Posted by Adam Whitehead at 18:19

Funny thing - nobody mentions the stolen part plot from Star Wars. Teppic - (Luke), Chidder - (Han Solo) He even got a very hairy person (Chewbacca) working for him and owns The Unnamed - (Millenium Falcon), which is a smuggler ship that moves quickly and is well equipped, Ptraci - (Princess Leia) - Teppic's unknown sister w/ attraction problems known from Star Wars.