Eric is a demonology hacker who is trying to summon a demon to answer his worldly desires. Unfortunately, due to a slight malfunction, the demon he summons turns out to be a wizard called Rincewind. To Rincewind's own bemusement, he ends up helping Eric achieve his goals, but wasn't reckoning on the side-trips to a remote jungle kingdom, the greatest war in history, the dawn of time and hell... 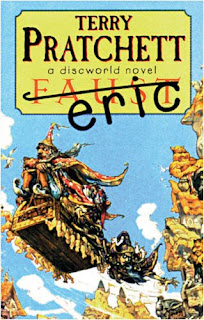 Eric is a bit of an oddball Discworld novel. Although listed as the ninth book in the overall series, it's not published by Corgi but by Gollancz instead, with a different cover design as well. It's also the shortest book in the series by far, coming in at 150 pages. The explanation is rather straightforward: it was originally a large-format illustrated book written by Pratchett primarily as a vehicle for the late Josh Kirby's artwork. As a result the story had to be streamlined and more of a travelogue of various locations rather than having a deep and complex narrative. In fact, it's reminiscent of the later book, The Last Hero, with the difference that Last Hero has been kept in print as an illustrated book rather than becoming a 'proper' novel.

Shorn of its illustrations, Eric is a rather simplistic and lightweight tale. It does some good stuff, like resolving Rincewind's cliffhanger ending from Sourcery (although leaving him on another one here), and there are a few good laughs, but it's all rather shallow, to be honest. Pratchett's depiction of Hell here seems to be at odds with the rest of the Discworld multiverse and although it becoming a bureaucratic, middle-manager's paradise is a funny idea, he doesn't really have the space or time to go into it in much depth. Essentially the book is an excuse for a bunch of obvious gags and filling in a few more locations on the Discworld not previously seen. 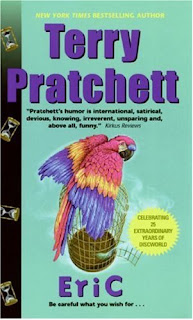 For all that, it raises the odd smile and, more interestingly, I have been informed by Gollancz that they are planning to reprint the fully-illustrated edition in the future, which should be worth checking out.

For now, Eric (***) is a very fast, briefly entertaining diversion from the main Discworld sequence. It is available now in the UK and USA.
Posted by Adam Whitehead at 22:01