Having already waxed incoherent on the subject of Jedi Outcast, I now turn to the final game in the Dark Forces aka Jedi Knight series. Jedi Academy sees some interesting twists to the established formulae. Most notably, whilst Kyle Katarn plays a major role in events, he is not the player character anymore. Instead, you play Jaden Korr, a would-be student at the Jedi Academy on Yavin IV (that moon the Death Star was trying to blow up in the first Star Wars movie). You can customise Jaden's appearance, deciding on his or her race and gender, before the game starts. 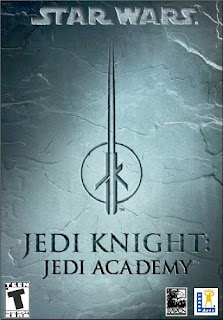 In general, gameplay follows a similar path to that of Jedi Outcast, accept that chunks of the game are non-linear. A Dark Jedi cult called the Disciples of Ragnos have gathered in an attempt to resurrect a former Sith warlord, but their activities are scattered across the galaxy. As the game proceeds you can choose which order to tackle missions in, with a few 'major' missions furthering the storyline and bridging the narrative along the way.

Whilst this is broadly effective and makes for a somewhat larger game than its forebear, it also loosens the narrative tension. Since you always have time to choose which order to tackle missions in and where to go next, there isn't really the feeling of being against the clock to stop the evil Dark Jedi plans, as there was in the previous games in the series. That said, individual missions are frequently inventive, such as a swoop bike chase through the canyons of a remote world or a raging battle with stormtroopers on a platform suspended high above a gas giant.

The game is somewhat tougher than Jedi Outcast as well, with the introduction of new, elite forms of Dark Jedi, heavy battle droids and jetpack-equipped stormtroopers providing significant opposition. This is mainly down to you having Force powers and a lightsabre right from the start of the game, so by the time you reach the end of the game you are significantly tougher than Kyle was at the end of the prior game. This does lead to the occasional ridiculous situation that a lightsabre duel with a random Dark Jedi you meet in a corridor can last longer and be significantly more difficult than the end-of-game boss fight in Jedi Outcast, which leads to moments of annoying frustration. However, given that you can sleepwalk through most modern games without any problems, playing a more challenging game can also be quite satisfying.

Jedi Academy (****) is an entertaining game which is not quite as dramatic or tense as the prior game in the series, but makes up for it with superior lightsabre and Force combat and a superb massive battle at the end of the game which sees a whole load of Jedi and Dark Jedi duking it out. Overall, a very solid and playable game. It is available now on PC (UK, apparently not available in the US any more), Mac (UK, USA) and X-Box (UK, USA).
Posted by Adam Whitehead at 11:55

Oh god I loved this game. Don't make me get out the ancient install discs ...

Academy and Outcast were two of the three reasons (KotOR) I bought an XBox, even though I already had the PS2. First-person lightsaber? It doesn't get more "must have" than that.

Yeah, I loved it myself. And reading this makes me want to play it all over again. And y'know, I might just. :D

Hmm I thought Jedi Academy was rather boring, in fact. I liked the linear storytelling of Jedi Outcast a lot more ... the story was more personal and more exciting. Jaden Korr is just another 0815 character without real Star Wars background.

Kyle Katarn instead ... well I don't have to tell you. He still appears in Star Wars novels that are set 30 years after his first appearance :)