Stop me if this sounds vaguely familiar, but classic 1970s SF show Battlestar Galactica is returning to our screens. The original show ran for 24 episodes in 1978-79. 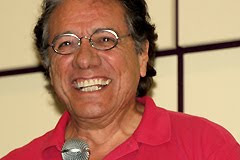 "Ha! Ha! A reremake? That's a good one."
"Er, we're not making this up."
Oh yes, and there was another TV series that ran for 80 episodes and five fricking years which finished less than five months ago for cryingoutloud and has a spin-off series called Caprica which doesn't even start until January.

The new project is a movie to be directed by Usual Suspects/X-Men/Valkyrie director Bryan Singer. It will stand alone in a new continuity unrelated to the multi-award-winning, highly-critically-praised TV show. Original series producer Glen A. Larson is on board as a consultant, so we may be getting a daggits 'n' lasers production rather than a bullets 'n' nihilism one.

I am not making this up. Honest.

Singer was involved the attempt to relaunch the show in 2001-02, which fell through after 9/11. The Sci-Fi Channel (now SyFy) relaunched BSG to great applause in late 2003. Glen A. Larson, who retained the movie rights, has let it be known that he is not a fan of the new series at all, and pointblank refused to allow SyFy to even consider making a theatrical movie based on the TV series (whilst simultaneously insisting on getting his name on the credits as a 'consultant', although he and Ronald D. Moore never spoke in five years of production). 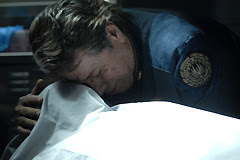 "What the frak? WHYYYYYYY?"
This is kind of preposterous, but it does make some warped sense. BSG was talked about way, way more than it was watched, especially here in the UK where most casual TV-watchers I speak to have never even heard of it. A movie would likely be seen by many times more people than saw the RDM version of the show.

Still, it just seems really, really weird. A remake of a remake before the remake has technically even finished (TV movie The Plan and spin-off series Caprica are still to come)? Very odd.
Posted by Adam Whitehead at 00:37

Glen A Larson is a lowbrow hack, who has never in his professional life created any original series or film. The 'original' Battlestar Galactica, despite of its promising basic premise (ie the exodus of mankind), is a ridiculous concoction, and Larson's so-called criticism of the 'relaunched' (now, what excatly justifies the "re" in there?...) BSG shows him to be an unlettered moron (as well as a bad looser: "consulting producer" my ass).
People who hype the 'original' series are obviously victims of unreflected childhood nostalgia gone fandom. Pathetic.

It just goes to show how poorly Hollywood understands what is a masterwork and what can simply be re-made.

Of course they shouldn't re-make it so soon ... it's a travesty.