The Well of Ascension by Brandon Sanderson

The Final Empire has fragmented into numerous squabbling bandit kingdoms and rebel states. Elend Venture has taken control of the former capital, Luthadel, aided by Vin, a powerful Mistborn, and the other leaders of the rebellion. But Elend's idealistic dreams of a democratic government are sorely tested when two other rulers lay claim to the city and arrive to besiege it. 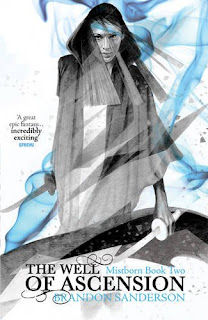 Meanwhile, the Terris Keeper, Sazed, is worried by reports of the return of a deadly form of the mists that appear at night, and begins an investigation into the prophecies that led to the Lord Ruler gaining power, searching for clues as to the location of the Well of Ascension, the only power in the world that might save it from destruction...

Picking up where The Final Empire left off, The Well of Ascension sees a marked change in pace in the development of the Mistborn series. The first book was a bit of a caper story mixed in with a traditional 'rebelling against the evil ruler' narrative with a great magic system on top. Book 2 now sees the former rebels coping themselves with the pressures of governance. Elend, a rather thin character in the first book, becomes a lot more interesting in this volume as his former idealism clashes with an increasingly cynical outlook brought about by events. There's also a lessening of focus on Vin. Whilst still the central character, Elend and Sazed come much more to the fore in this novel as well. There's also a new Mistborn character, Zane, who enters the story and provides an effective sparring partner for Vin. Sanderson's worldbuilding also comes on a lot in this book, with a logical development of his metal-based magic system. 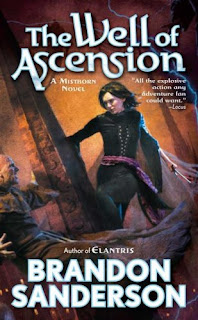 On the minus side, the change in narrative style means a slackening of the pace. There's a lot of talk and intrigue in this book, although it isn't entirely convincing and leads to a static pace as the various factions are engaged in a stand-off for most of the story, no one side able to move without being defeated by the others. This makes for a slightly less engaging story than the first book.

However, in the last 200 pages or so Sanderson suddenly turns everything up to 11. All hell breaks loose and as well as featuring major battles there are a series of stunning revelations about the prophecies that our characters have been following so far. The prophecy is a particularly annoying staple of epic fantasy literature but Sanderson's treatment of it at the end of this book is fascinating, making for a great twist ending.

The Well of Ascension (****) takes a while to get going, but decent character development keeps things ticking over until the action and revelation-packed finale. The novel is available now in the USA and will be published on 10 December 2009 by Gollancz in the UK.
Posted by Adam Whitehead at 14:54

Email ThisBlogThis!Share to TwitterShare to FacebookShare to Pinterest
Labels: brandon sanderson, mistborn, the well of ascension

Thanks for the review. I just finished Final Empire and am looking forward to moving on to Well of Ascension. Most other reviews I've read seem to agree with your consensus about the pace, but it sounds like the ending makes it worth slogging through.

I loved the first book and I was kind of disappointed by the reviews of book 2 and 3 so far. Your review made me optimist again!

I must admit, early in the book, the continued use of that line cracked me up to no end.

Your views chime nicely with mine. I'm looking forward to part 3 - The Hero of Ages.