In the beating heart of every SF fan of a certain age, there is the burning wish that lightsabres actually existed, and you could actually use one effectively without killing yourself (seriously, self-decapitation must be a bit of a worry with those things and Jedi health insurance must be shocking). Many are the Star Wars games that have promised you the ability to use a lightsabre in battle, but most, frankly, suck. 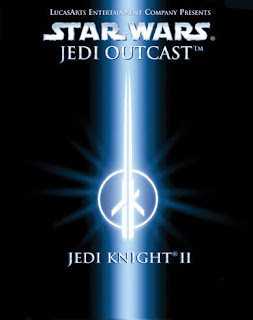 Among the games that do deliver on the lightsabre destruction angle are the splendid Knights of the Old Republic duology of role-playing games (and their forthcoming quasi-sequel, The Old Republic), but even they have a slight issue in that as role-playing games, you're not really swinging the sabre yourself, the numbers and stats are doing that for you. No, to really get into the art of lightsabre-swinging mayhem, you need to step back a bit further, to the classic Dark Forces series of games.

There are five of these games: Dark Forces (1995), Jedi Knight (1997), Mysteries of the Sith (1998), Jedi Outcast (2001) and Jedi Academy (2003), and my original intention was to replay and review all five. Several hours of swearing at DOSBox and fruitless fiddling with emulators and compatibility modes later, I decided to go with the two that actually work on Windows XP with modern graphics cards.

The five games broadly follow a story arc centred on the mercenary and all-round scoundrel Kyle Katarn (although he doesn't stay that way, which is probably not a huge spoiler). In Dark Forces - a blatant Doom clone - Katarn is drawn into helping the Rebel Alliance and is actually revealed as one of the guys who stole the plans to the Death Star. According to Star Wars lore, there are actually about 25 people who stole the plans and got them to Princess Leia's ship and because of the Lucasfilm command that all computer games, novels and probably commemorative tablemats are canon, there are fairly convoluted hoops to jump through to explain how they all did so simultaneously. Suffice to say the Death Star plans are basically like a relay baton handed from various character to character until they get into Princess Leia's hands. 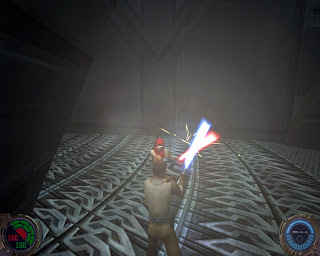 "VROM! VROM! KRASH!"
"Can you please stop doing that, the sound effects are done for you, it's very distracting!"
"Oh, sorry."
Anyway, Katarn, somewhat stiffly and with a strangely limited field of vision, blasted his way through various missions for the Rebels, eventually defeating a project by the Empire to build some badass new robot stormtroopers, who, unlike their human counterparts, actually could hit a barn door if they were standing right in front of it. In Dark Forces II: Jedi Knight, the power of a new, proper 3D engine and mouse-driven control system means that Kyle can suddenly wield a lightsabre and also the power of the Force (sort of, in a 'Press F1 to push someone a bit' way)! In terms of level design and, possibly more importantly, corny FMV acting, Jedi Knight is the best game in the series, although the actual graphics and the range of lightsabre moves and Force powers are a bit crappy in comparison. Its expansion, Mysteries of the Sith, is also quite decent, although the number of irritating button-pushing puzzles is quite annoying. There is also a nice bit of variety in that the game allows you play the role of iconic Expanded Universe character Mara Jade (who later marries Luke Skywalker and has his son, Ben) for a while.

Anyway, to Star Wars: Dark Forces III: Jedi Knight II: Jedi Outcast. Aside from hideous crimes against colon use (erm), the game uses the swanky Quake III: Team Arena graphics engine, which means that eight years after release it still looks great. There are a few clunky moments, with the lack of a proper physics engine meaning that grenades tend to fly all over the shop and stormtroopers go through an elaborate falling to their knees going "Arrgh!" death routine like third-rate extras hamming it up, but aside from that the game still looks very nice indeed, and even the most modest modern laptop should be able to run it with less effort than it takes to fire up Minesweeper.

The plot has Kyle Katarn rejecting the ways of the Jedi after the events of the last game and, thanks to the game ending at the powerful Valley of the Jedi, he has voluntarily given up his connection to the Force. Various character and story-based reasons are given to justify this, but really it's so you start the game with no lightsabre, no Force skills and just a blaster for company. This is an idea of mixed success, since it does make the opening levels more challenging but they also get a bit tedious. The first mission, to a remote Imperial Remnant outpost, is actually quite dull. The base is badly-laid-out and you end up running in confusing circles for a bit pushing buttons until you eventually move on. Around the third mission you get in over your head, your co-pilot is killed by the evil Dark Jedi Desaan (who comically looks like a purple dinosaur, slightly reducing his threat value) and you end up re-embracing the ways of the Force to kick his sauroid ass across the Galaxy, although not until a scarily dead-eyed Luke Skywalker runs you through his Jedi Assault Course to test out your powers, which takes about three minutes (I was a bit hazy on the logic behind this part, but okay). 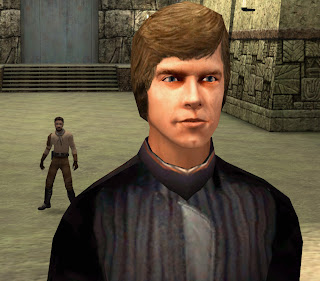 "Er, Luke, I'm over here. And has your head always had that many angles in it?"
Of course, once you get a lightsabre the shit gets real. Enemies' arms fly off at the merest contact with your blade, and there's some cool moments when you can send whole groups of stormtroopers plunging to their screaming deaths with Force Push, thanks to the perennial Star Wars universe problem of having lots of pointless tiny bridges across vast chasms with no handrails: I'm guessing the Emperor really fecking hated Health & Safety inspections of his facilities. The game sees you pursuing the reptilian Desaan and his Dark Jedi minions across the Galaxy in an effort to destroy him, taking in some traditional Star Wars locations like Nar Shaddaa (the Hutt crime moon) and Cloud City along the way. You also have to storm a colossal Imperial starbase and then single-handedly wipe-out the entire crew of a gargantuan Imperial warship many times bigger than a Star Destroyer, which is all in a day's work for a Jedi. At the end of the game you have to defend the Jedi Academy on Yavin IV from attack, which involves commandeering an AT-ST (those chicken-legged scout walker things that resist blaster bolts but curiously can be destroyed by Ewok-propelled logs) and then fighting Jurassic Darth in a classic duel to the death which you win by skill, or possibly judicious use of quick-save and quick-load.

Lightsabre-less opening missions aside, Jedi Outcast remains a damn fine game. Graphically, it still looks great as I mentioned earlier, although the fact you can't illuminate dark areas with your lightsabre and have to use awkward-to-select night-vision goggles instead was a bit stupid even in 2001. In all other respects, graphics and sound are great. Gameplay is also very strong. Mouse-driven lightsabre combat is where it is at, with the player able to pull off a range of moves, attacks, blocks and combs that is very impressive. A lot of the moves are situational, depending on the location of the nearest enemy, whether they're a normal enemy or if they have a lightsabre as well and so on, which means that to the untrained person watching over your shoulder, you actually look like Qui-Gon and Obi-Wan (picking the best lightsabre fight from the six films) going ape on Darth Maul's backside, when in fact all you're doing is pointing in the enemy's vague direction, clicking madly and hoping for the best. Once you get the hang of it, it's pretty cool and defeating an enemy in a fierce lightsabre duel with a sweet finishing move may result in the player (not this one, obviously) inadvertently yelling "Yeah, bitch! Who is the Yoda? WHO IS THE YODA!" at the screen, which depending on home circumstances may not be advisable. 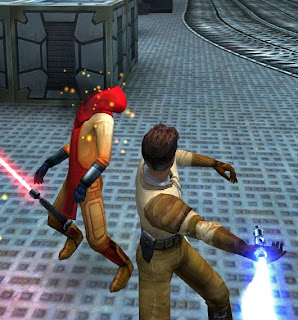 "I AM THE YODA!"
The story is decent, although so Star Wars by the numbers it hurts. Dark Jedi, ancient powerful weapon blah blah. It's basically just a set-up so you can run into various situations and kill lots of people and solve various puzzles (although an awful lot of these puzzles fall into the 'push crate over here' and 'this door is unlocked by a button three floors up on the other side of the base, go press it'). It's pretty good. Kyle Katarn also makes for an engaging protagonist, with his struggles with the Force being quite interesting, if again nothing new. In fact, the only disappointment with the story is the single ending. Jedi Knight and Jedi Academy both have 'light side' and 'dark side' endings, but this game only has the one.

Jedi Outcast (****), if you can track down a copy, remains a very enjoyable slice of Star Wars action. It's a fun game which recreates the simple coolness of wielding a lightsabre and cutting a swathe through vast numbers of foes. The game is/was available on PC (UK, USA), Macintosh (UK, USA), X-Box (UK, USA) and GameCube (UK, USA). I seriously recommend getting the PC or Mac versions, however, as the gamepad-controlled versions are not as strong.
Posted by Adam Whitehead at 00:29

Great reviews! Oddly enough I was just thinking of Jedi Outcast the other day and how it felt about time to fire it up again and play it. I enjoy turning on up the gore factor to watch storm trooper arms and legs go flying off. I agree with you that outside of the more story-driven experience of the Old Republic games, it is the best of the Star Wars games out there.

The new Star Wars game (Star Wars: Old Republic: Jedi vs. Sith) looks absolutely amazing. I've never played any of the series that you mentioned, but they do look fun. I was disappointed in Force Unleashed, but I enjoyed the KOTOR games.

Nice blog, by the way. Glad I found it. Looks like we have similar tastes in books, games, and movies, so I'll definitely be stopping by.

I was always a fan of the Kyle/Jan relationship and I remember being rather angry and sad when she dies in Jedi Knight II.

On a side note I was extraordinarily disappointed that they ditched the Moldy Crow (which crashed at the end of Jedi Knight)for the Raven's Claw.

You know she's not dead? Desaan and Tavion faked killing her and then used her to lead them to the Temple of the Jedi? Kyle rescues her later on and she's mentioned as being fine in JEDI ACADEMY, although she doesn't appear.

I played this game a lot when it came out, and just gave it and my old computer to a friend's kid who's nuts into Star Wars.

One thing I can't show him (yet) is the cool hack Raven slipped in. During gameplay you bring up the console (Shift + ~) and then type "helpusobi 1" to enable cheats, and then g_saberRealisticCombat 1.

This makes the lightsabre act much more realistically, as in cutting off arms and legs. Works especially great when throwing the lightsabre.

I found out about it here:

Just scroll down a little to Tim Swindler's post. It seems you can also set it to levels 2 and 3, but haven't tried them yet. Enjoy!

Yeah, I know. I was trying to avoid spoilers do as not to lessen the impact of the moment for those that play the game. Now you've ruined it! :P