The Guild of Alchemists have created a new form of entertainment - moving pictures! Soon Ankh-Morpork is gripped by this latest craze and everyone's trying to break into the business as more and more 'clicks' are made out at Holy Wood. The speed with which the phenomenon spreads is quite strange and soon reluctant actors Victor Tugelbend ("Can't sing, can't dance, can handle a sword a little,") and Theda Withel (aka 'Ginger') are caught up in epic events set against the backdrop of a world gone mad! With a thousand elephants! Once the order arrives, of course... 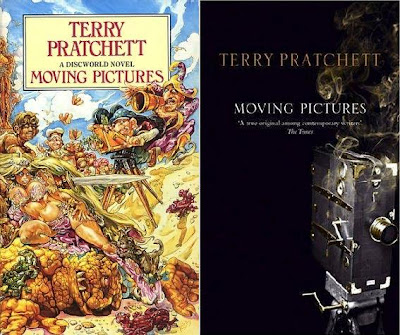 Moving Pictures is a bit of a 'fallback' Discworld novel. That is, whilst still entertaining, funny and enjoyable, there's also the feeling that Pratchett simply came up with a cool idea and let it meander around for a bit aimlessly rather than being really fired-up and inspired by the concept. His taking of a real-life phenomenon and turning it into a Discworld novel is a pretty consistent way generating stories throughout the series (he also does Discworld takes on the theatre, the post office, rock music, organised banking, Christmas, war and newspapers in future books, with football and taxation still to come), but it does feel like he hasn't put much more effort than that into the book compared to what he did with, say, police procedurals in Guards! Guards!

Of course, Pratchett on an off day is still considerably more entertaining than a lot of fantasy authors at their best, so Moving Pictures is still a decent novel. Pratchett is clearly a big movie fan and it's fun trying to find all the references to various films in this book, from Gone with the Wind and Charlie Chaplin through Laurel and Hardy to The Blues Brothers and Back to the Future, not to mention a particularly hilarious inversion of King Kong. There's also some nice prescience on Pratchett's part: the book is now twenty years old and his comments on product placement and the culture of celebrity seem more relevant today than ever before. Characterisation is also pretty good, and the regular cast continues to grow with the arrival of Cut-Me-Own-Throat Dibbler, Gaspode the Wonder Dog (don't ask) and most of the regular cast of Unseen University, led by the formidable Archchancellor Mustrum Ridcully (finally ending the tendency of UU archchancellors in the series to have the lifespan of a colony of terminally depressed lemmings living near the Grand Canyon). 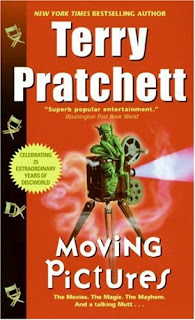 The book has a rather unusual problem for Pratchett, which is pacing. Pratchett usually handles pacing pretty well in his books, with a slow introduction to the story followed by rising action and a (usually) well-handled climax. Moving Pictures isn't quite like that, and stutters a few times with a start-stop feel to the action. In fact, it appears that the main problem has been solved two-thirds of the way through the book, followed by the 'real' grand climax in Ankh-Morpork which also turns out to be a fake-out before we get the final, somewhat anti-climatic, ending in Holy Wood. It's a bit all over the place, to be honest. In fact, it feels like on of those really big Hollywood action blockbusters which goes on for about half an hour too long after the movie should really have ended, which I suppose is quite appropriate.

That said, whilst Moving Pictures is not one of the stronger Discworld novels, it's still better than the earlier, less-well-written books and many of the individual characters and episodes in the book are funny and intelligently-handled, as always.

I'm a huge Terry Pratchett fan and I completely agree with you about Moving Pictures. It's probably my least favorite Discworld novel. But, then even when he's off, Pratchett is still worth reading. (If only once, this time.)

Again with the anti-climatic end to a book - do so many authors really have this much hatred of the weather?

What's good about Moving Pictures is that it introduces some of the coolest characers in the series : Ridcully and the whole Unseen university faculty (except the Librarian, who was there in earlier books)

I think the best part of moving pictures was in introducing other characters that are secondary in the better Discworld books. Gaspode cracks me up. He's such a simple creation, yet so well done.